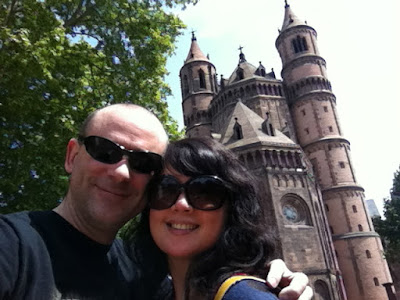 Me and my wife in front of the Worms Cathedral

Saturday: Ahhh…so nice to sleep in! After waking up and getting ready at a leisurely pace, my wife and I headed off to the Rhein-Neckar Harley Davidson store. I needed to purchase a battery for my motorcycle because mine was totally dead. My bike has been in storage since basic training and found out the battery would not even take a charge. The store is about 20 to 25 minutes away in a town called Ludwigshafen. Once there I asked if the lady at the parts department spoke English and she said only a little. I was able to tell her what I needed in German and it all worked out. Luckily we also had an extra VAT form. This is a form US folks can use when buying something on the German economy and they take off the tax which is 19%…so with any big purchases it's really worth it. We ended up getting a couple t-shirts and headed off with a new battery. Now once I take the motorcycle safety course, I'll be able to ride my bike here in Germany.

By this time we were getting a little hungry and wanted to grab a bite to eat while we were out. We punched in what we thought was a place to eat in our GPS, but ended up in a town called Worms. It wasn't where we were expecting to be going, but we made the most of it. We parked the car downtown and headed to the city center. We ate at a bakery and then had some ice cream at one of the vendors. The town had a huge cathedral which we decided to explore. The cathedral was pretty cool. We walked around inside checking out the various sculptures and then around outside admiring the architecture of this ancient building. It's awesome to be able to just stumble upon something so grand.

We headed home and spent the night watching TV shows and relaxing.

Sunday: This morning we went to church for the first time here in Germany. One of my co-workers was having his son baptized. His wife is a local national, so the church was of course a German church. It was an interesting experience attending church in an entirely different language. I would catch about every 4th or 5th word, but that was about it. We watched the baptism and then we headed back to Patrick Henry Village for a barbecue that my co-worker was throwing. Most of our office showed up, as well as my co-worker's wife and her family. Good food…good people…good times.

After feeding our faces and visiting for a while we headed back home and video chatted with family for a bit before relaxing and watching some TV shows…..a good weekend.

You can check out more photos from our accidental trip to the city of Worms: