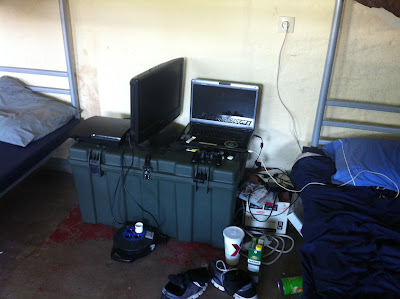 Some people come very prepared...this was the guy next to me with his TV, PlayStation and laptop. The TV was left on playing a movie that the NCOIC had to finally come and turn off.

Rude and inconsiderate…that is how my morning started off. Those of us who are on my shift were able to sleep in because we don't have to report to work until 1300. Others that started waking up before 0600 were noisy…yelling across the barracks and just being generally loud. It just pisses me off that these guys don't care about anyone except themselves. I can't wait until I'm back in my house with my wife…back to normal. Once everyone finally left a little after 0700 I was able to get a little more sleep and finally got up around 0830. The morning spent reading and playing games on my iPhone.

We headed to work at around 1230 giving us time to swing by the food vendors. I ordered a bratwurst for lunch and grabbed a drink from the shoppette. We then headed to the help desk and did exactly what we've been doing the last couple of days…nothing. We heard that the exercise was officially over. We also heard that even though we were all put in for awards, they were sent back. Last we heard, the head civilian guy was trying to push them though, but at this point I don't really care. After the whole thing with my PCS award not going through, the army awards system has left a bad taste in my mouth. To tell you the truth I don't really care if I ever get one. Since I have no plans to become an NCO, I don't have to worry about the promotion points that come with an award, so it means nothing to me. I'm tired of being told I'm getting an award, then never seeing it get done. Who cares? Also besides the first few days, we haven't done much except have to stay in crappy barracks and eat crappy DFAC food…does that deserve an award? Maybe the iron stomach award…LOL.

We were able to leave at 1700 instead of 1900 because of the end of the exercise. We found out that we do indeed have to go in tomorrow in order to in-process people for the next exercise, which is starting right away. The permanent party folks will take over and then we'll be free to go home. I can't even in-process people because I don't have domain administrator rights, so I'll be doing nothing…along with the others that don't have domain administrator rights. The truth is that we only have 3 computers to in-process people and we'll have about 20 workers there in the help desk area…so there will be a lot of people standing or sitting around doing nothing.

We got a TMP and headed to the bowling alley to pick up dinner from their restaurant. Once back at the barracks, I read for a bit and then watched "In Time". This was an interesting movie set in the future where everyone has been genetically altered to stop aging at 25, after that they get one year to live. They can however purchase more time, so in essence "time" becomes the new currency. Go to work and get paid in time…your time remaining shows up on your arm and when it runs out…you die. Want a latte? That will be 3 minutes…then you watch the time get taken off the clock on your arm. The rich can live forever while the poor literally work day to day to stay alive. The story turns out to be a futuristic Bonnie and Clyde with a Robin Hood twist.

The day started off with rude and inconsiderate people and that is how the night ended as well. The guy next to me who brought a TV, a playstation, and a laptop started watching a movie. Everyone else in the barracks uses headphones when watching a movie, but this guy has his blaring over speakers and then just falls asleep. Finally the NCOIC cam over and turned it off at around 1030. I'm so glad this is my last night here.