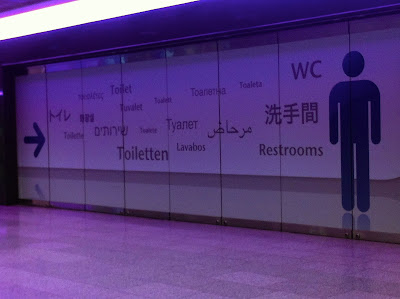 The last 30 days has rushed by as I knew it would. A month off seems like a lot of time, but I had to make sure all my household goods were picked up and shipped, and also had my car shipped off to Germany. During the time my wife and I both got sick for a good two weeks which really put a damper on my whole leave…so much for the flu shots they forced me to get.

The morning started off with yet another sad good-bye. It seems like I've had a number of these since joining the army, but this one was especially emotional because my wife was leaving with me. We had breakfast together with her family as well as my mom. I did pretty good until I was hugging my kids and saying good-bye. It just sucks having to leave them once again.

My father-in-law drove us to the airport in Seattle where we almost ran into a nightmare while checking in. Since we are moving to Germany for 3 years we packed quite a bit into our luggage as well as our carry-on baggage. My orders stated that we could each check in two bags at 70 pounds, but it turned out that one of my bags were over weight. The carry-on bags also had a weight limit we were unaware of. They weighed everything and it turned out that we had to actually check one of our carry on bags and pay extra for that as well as the overweight bag. The guy working at the counter for Lufthansa asked if I was PCSing to Germany and said he was former military and served in Iraq, then proceeded to tell me that he's going to waive all the charges which would have been $450! A great way to start our new adventure.

The flight was straight through…long and uneventful. We left at 1500 on the 26th and arrived at 1000 on the 27th. We both only grabbed some cat naps during the flight so we knew this was going to be a long day. Getting off the plane we weren't sure what exactly to expect. My orders said if there was not a liaison waiting then head to the USO and check in. When we found out how to get to the USO, we headed there with our cart full of bags and a guy came walking up in civilian clothes asking if we were PCSing. I said yes…and we followed him to a special check in area where he signed my leave form and we then waited for a bus to Heidelberg. Unfortunately we just missed the last bus so we had to wait 3 and a half hours. We hung out in the USO using their free Wi-Fi and my wife was able to slip in a quick cat nap.

At 1300 we then headed to the special check-in area once again and waited in their waiting room until 1330 when they accounted for everyone, then told us to wait some more. Our bus finally came around 1445. There was only my wife and I as well as one other fellow on our bus to Heidelberg. The bus ride was about an hour and we were dropped off at the lodging office in Patrick Henry Village. As they were checking me into temporary housing, they kept asking me if my sponsor was there. He wasn't at first, but then he arrived about 10 minutes later. He had a small van that he loaded all our baggage up and gave us a mini tour of the post with a stop at the commissary before dropping us off at our room. The room is much like a hotel room. It has a small bedroom, a living room, with a small bathroom and kitchen.

We were so tired. We tried to stay up watching a show, but it was a struggle for both of us. By about 1845 we gave up and went to bed. Being up for so long and unable to sleep on the flight finally took it's toll. We went to bed and both were out within seconds…hopefully we'll be able to sleep for a long time.