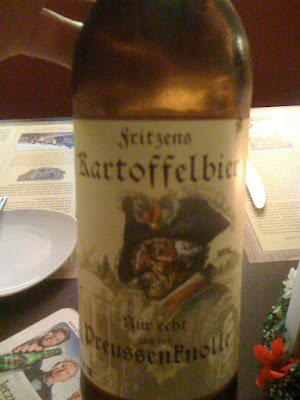 Tried a Kartoffelbier (Potato Beer) during our anniversary dinner...not bad!

I had put in paperwork to get the day off today as soon as I found out that we can get a day off on our wedding anniversary. The problem is that I only found out last week. The paperwork never made it all the way through, so I ended up going to PT in the morning. My boss ended up telling me I could go home after discussing it with our NCOIC. I just had to keep my phone handy since I wasn't officially on pass. I may complain about various aspects of the army and my job, but I have nothing but good things to say about my boss. He really cares for and takes care of his soldiers. A lot of stuff is out of his control since he's only an E-5, but what he can do for us…he does.

I took my wife to work and then came back home, then relaxed a bit. I took some lunch to my wife and met her for a picnic lunch. After she got off, I picked her up and we headed out to a little restaurant located in a town called Hirschhorn located about a half hour up the Neckar river. It was our first time out that direction and it turned out to be a nice romantic drive. There are small little towns along the river and when we ended up in Hirschhorn, we had to get out and walk in the "old town" to get to the restaurant called "Kartoffelhaus" (Potato House), which we heard served great steaks. The service was great and the food was amazing! A great anniversary for the both of us…and actually the first anniversary we've been able to spend together because I've always been away in the army.

Email ThisBlogThis!Share to TwitterShare to FacebookShare to Pinterest
Labels: 25B, anniversary, Army, eating out, Germany, restaurant