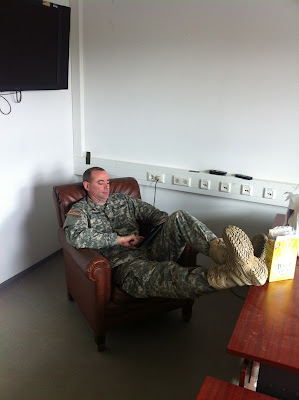 An "action" shot of what I did the entire day today....sit in a chair and read....pretty crazy.

This morning I got up and got ready just like every other morning, we started work at 0700 and as I was sitting in the help desk area the NCOIC called me and the lone girl in our group over to him. He told us at 0900 to 1700 we would be doing guard duty at a building. I was thinking to myself this is pretty stupid, but I've long since given up trying to figure out the ways of the army.

The girl I was with was pretty pissed off, she actually is in the same unit as the NCOIC and is not too happy to have to be here with him for the entire exercise. She took sleeping pills for the trip here so she wouldn't have to listen to him on the drive to the exercise…LOL. So we head out in search of the building we are supposed to guard because there will be German nationals working in there…it's basically a babysitting gig. We started looking for building 1026 and saw the direction we were walking was in the 1400's and getting higher, so we turned around and headed towards the 1000's. After looking all around the buildings in the 1000 range, we couldn't find this particular one…1026. We went inside one of the buildings and asked, the guy inside said "oh this happens all the time…I have a map, let me show you". It turns out that building 1026 is actually out of order and at the end of the 1400's…totally out of place. We ended up walking all over the place, but finally made it to our destination a half hour late.

Once there we found just an empty building with some construction workers in it. We found a small office and settled in there. We talked quite a bit during our walk and our time in the office while we were babysitting the Germans. This girl (I should actually be calling her a woman…she's almost as old as I am) is a PFC, but she's been in the army a while and has actually been deployed. She has a purple heart that she received on her deployment because she was shot in the leg. She was a police officer in New York for 12 years before the army. I then heard an interesting story on why she is currently a PFC. She actually punched a female officer a few times because of some disparaging remarks the officer said. She lost her rank from an E-4 to an E-3, but after challenging it she will now be receiving her rank and back pay because they ruled that the officer's actions caused the incident. It was a pretty crazy story!

We did absolutely nothing all day long. I sat in a chair and read from my iPad and also a copy of the army times that I bought during a run to the shoppette. The PFC wanted to sham as much as possible because this was such a stupid job. What doesn't make sense is that we were sent there to babysit the workers, but they already had access to the building and had been doing this work already before we arrived and before today. They were surprised we were even there. We also were only scheduled to work until 1700 and the construction workers were not leaving until 1900. I have no idea why we were even there. We took an extra long lunch and I drove the TMP to the food court where I had some Pizza Hut. We spent a little time in the PX before heading back.

Once back I read more and sat in a chair again doing absolutely nothing. We ended up leaving knowing we accomplished absolutely nothing today…what a waste of time. I headed back to the barracks and was able to copy a number of movies from her terabyte hard drive. She had a boatload of movies, I'm set for a while. Tonight's movie…"Real Steel" This is a movie my son watched and wanted me to see. So the whole time I was watching it I was thinking of him…it didn't help that it was a movie not only about fighting robots, but also about a father and son. Made me miss my son like crazy. I can't wait to see my kids this summer. I mentioned yesterday that I definitely will not be reenlisting for various reasons, but living closer to my kids is one of the main reasons. Having a normal job and being able to see my kids on a normal basis is going to be so nice. I hate being away from them for these long periods of time…it just breaks my heart.