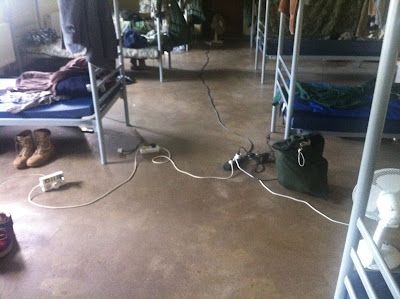 This morning was another normal morning getting up, getting ready, eating a bowl of cereal at the DFAC and getting to work at 0700. The day was pretty uneventful unlike yesterday. I worked on a couple of tickets…fix a printing problem and installing some software. I then ran a cable to connect a VTC machine. The problem was there were no more ports in the room or the adjacent room next to it, so I had to run a cable two rooms down…not a bit deal, but that was the highlight of my day.

We found out after arriving that only the night shift is going to start the 12 hour shift, we would work 0700 to 1300 and the NCOs would stay until 1900 when the night shift started it's 12 hour shift that we will relieve at 0700 tomorrow morning. This was good news, I was already mentally prepared to work the 12 hour shift, but luckily that will wait until tomorrow. It was so slow I can't imagine staying there until 1900 tonight. One of the air force guys was so bored he was looking for things to do to others, like sticking duct tape on them without them noticing.

After work I headed back to the barracks and took a short nap before talking to my wife for a bit. I read some more of my book (book 1 of George Martin's "A Game of Thrones" … I have all four books loaded on my iPad). As I was chatting with my wife we were talking about the civilians working here at the exercise. They are the tier 2 level support and have a lot more privileges than the rest of us working the help desk. I then realized that there are no military folks at all in the tier level 2 support. My wife said "you need to get those privileges" when I was telling her about how often we can't complete a ticket because we don't have enough privileges. The funny thing is that I can get certified in everything under the sun and have all the degrees in the world, but I will not be able to work in there because I'm an E-4 and in the military. Gaining rank will not even help because when you get a higher rank, you do less technical work and more supervisory work. Another reason I will not be staying in the army after this first enlistment. I will get as much as I can out of the army while I'm in, but there is no way I'll be staying in.

The rest of the night was uneventful and pretty much the same routine watch a movie, read a little, then take a shower and get ready for bed. I watched "Transporter 3" tonight…a movie I've seen before, but I always enjoy watching a good action packed movie. Starting with the help desk shift tonight, the help desk will be manned 24 hours a day…with our 12 hour shift coming up tomorrow. We'll see how it goes.