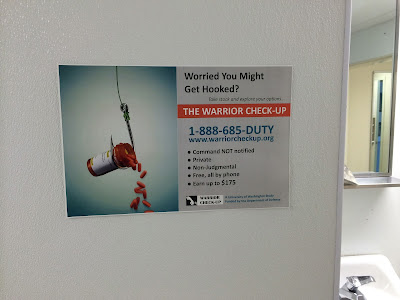 In the warrior transition unit, there are a lot of people prescribed
a lot of drugs for all the various physical and mental issues.
Now you can earn some cash for getting a "Warrior Check-Up"

As I was sitting in my car this morning waiting to head to morning formation, I got a call from my squad leader. He gave me a heads up letting me know that I was going to have a pee test this morning. With that knowledge, I headed to formation with my PT jacket on and coffee in hand.

I then had my name called along with about 10 others for the pee test, so while everyone else did PT we headed to the staging area inside the building. The normal routine ensued with the NCO reading the pee test script. I sat in a chair drinking my coffee and playing games on my iPhone. I finished my coffee and then filled up my cup with water…about 45 minutes passed and I decided it was time. I had to kind of go earlier, but I didn't want a repeat of last time…I had to make sure I had to go…and go a lot! My squad leader came in the bathroom with me, but unlike the last episode, he stood back and let me do my thing. No problems this time.

I then headed to the SFAC to check my army email. Once that was done I hung out in my car until lunch time, then made my way back to the SFAC to eat it. Once lunch was finished, I headed to the library to do schoolwork. I stayed in the library until the end of day formation at 1600. During this formation we had to hear more about how bad people's rooms were in the barracks…then we were cut loose for the day.

While home I checked my personal email and found that I received a message stating my household goods have finally arrived. I replied right away stating I can have them delivered as soon as possible…we'll see when that is.