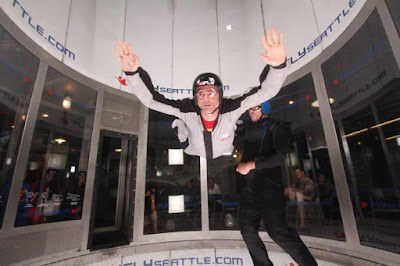 Me doing some indoor skydiving

Usually the weekends are my own, but this one had another QTC appointment that I had to attend. Luckily the appointment was in Bremerton where I currently live. It was very close to the hospital, so I dropped off my son and wife at the hospital to visit my grandma who is still there. I then walked across the street to the QTC office and checked in. They grabbed a folder and promptly handed me a check. I was a little surprised by this, but I guess since I am stationed at Ft. Lewis and had to drive all the way to Bremerton for the appointment I got reimbursed. I'm not going to complain about getting an $18 check. (I didn't realize until I got home that they gave me a check with another person's name on it...not a big deal since it's only $18, but it did make me shake my head)

I then filled out a quick questionnaire and had my hearing tested. Ever since basic training I've had ringing in my ears. The earplugs they give you didn't really work very well in my ears. After basic I always use the foam earplugs that can squish and then fill up all the voids to really protect your ears, but the damage has already been done. The last time I had a hearing test before I left Germany, the tech said I've had a bit of hearing loss. I also have a constant high pitched ringing in my ears all the time (tinnitus). So I went through all the tests and the tech told me I do have hearing loss at the high ranges, so it may be difficult to hear women and children. I was sure to pass that along to my wife…I had to let her know that it's my ears, I'm not ignoring her…lol.

The rest of the day and weekend was spent giving my son his belated birthday present. I was unable to be with him for his 13th birthday, a big one! So we headed to lunch at a restaurant called "Claim Jumpers" (good food and a lot of it). After that we went to iFly Seattle, an indoor skydiving establishment. We suited up and after getting a few minutes of training, headed into basically a vertical wind tunnel one at a time along with an instructor. It was a pretty cool experience, and probably the closest I'll ever get to actual skydiving because of my neck issues. We then headed home and watched "Pacific Rim" at the local theatre. It was actually better than I expected…but I wasn't expecting much. I told my son he could choose any movie he wanted. The movie was a twist on the classic Godzilla movies, where big creatures come out of the water and attack cities. Only giant robots have a chance to beat them. It was full of non stop action for sure!

Email ThisBlogThis!Share to TwitterShare to FacebookShare to Pinterest
Labels: 25B, Army, medboard, medical