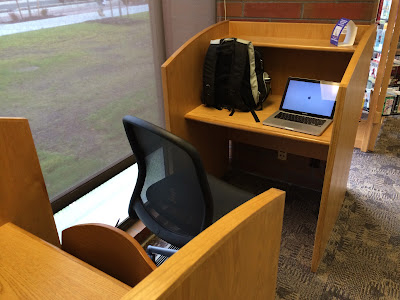 My new hang out inside the library on post

I headed to the morning formation in my ACUs because I wanted to head to the finance office as soon as possible. After the formation I headed to Waller Hall and found out that the finance office doesn't open until 0830, so I headed back to my car and took a nap. I finally received my travel pay for the PCS move, so now I can move ahead with the hotel reimbursement.

I headed in a little after 0830 and was surprised at how many people were already waiting. There are three different books at the finance desk, each one serves a different purpose. The one I needed was the "Travel" book and luckily there were only 3 others in front of me. The problem was they only had one person working for the first 20 minutes or so, and that one person never even checked out the "Travel" book. Finally another person started working the desk and processing through each of the names in the "Travel" book. When mine was called I found out that I had to fill out 3 sheets of paperwork for them to process my claim. I sat down at a nearby desk and got to work. When I finished and turned them in, I also had to provide a copy of my orders and was told I should receive the reimbursement 15 days from tomorrow. I'm glad that is all taken care of finally!

I headed to the SFAC and checked my army email on their computers. I also had my weekly self assessment to complete. The assessment goes over each area of your life and you have to rate each one. If anything is rated other than "no problems", you have to write something in the comment section. Mine is always the same…no problems in everything except "medication" and "pain". The medication doesn't take away the pain, but does usually put a dent in it.

I headed out to the lobby of the SFAC and used my laptop with headphones to finish up UFC 161. I had been doing this in my car, but today it's way too hot. Anytime I'm outside with the full uniform on, I start sweating and inside the car it's multiplied. I went to have my lunch in the SFAC dining area, but some workers had the only 4 tables all covered up with construction paper. I guess they are too worried about decorating for the WTB soldiers than actually letting us use the facilities. I headed outside and was able to find a table in the shade to eat.

I decided to check out the library. One thing I found out very quickly was that you don't want to travel anywhere near the PX during lunch hours! It took me forever to get to the library because of all the traffic on post. Luckily I have air conditioning! When I arrived at the library, I was amazed at how many people were inside utilizing the computers! The place was packed! I headed to the edge where they have single desk work/study areas. I was able to setup my laptop at one of these and access the free wireless internet that is available. Even with the A/C on in the library it was hot. I'm not sure what the rules are for wearing the uniform in the library, but I had to take the ACU top off while I was there. That helped quite a bit, but it was still hot. Usually living in western Washington, one does not have to deal with the heat like this…but there are those few days a year that we call summer.

I headed to our evening formation which is at 1600. I used to always arrive fairly early, but have started arriving closer and closer to 1600 because nobody used to show up until almost 1600 anyway. Well at some point I guess word was put out that formation was at 1545 today. I showed up and everyone was pretty much there already. I don't really give a crap…nobody told me anything. I showed up and the NCO gathered everyone around and put out that our weekend safety brief will be at 1300 on Wednesday because of the holiday 4-day weekend. He then dismissed everyone.

Email ThisBlogThis!Share to TwitterShare to FacebookShare to Pinterest
Labels: 25B, Army, medboard, Napping