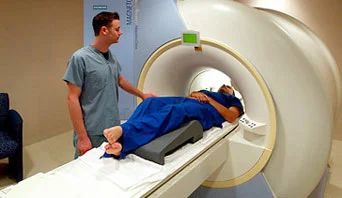 An image from the internet just to give you an idea of what
an MRI scan on your brain looks like. My setup was
almost exactly like this one.

There was no PT this morning, instead we were supposed to form up at 0815 at Cowen Stadium for our battalion organizational day. This of course means I arrive 15 minutes early, so I was there at 0800. We formed up and stood for 30 minutes before they decided to move us to the bleachers. Once we were all sitting, the battalion commander gave a little speech and described the events for day. Once he finished about half the people just got up and left.

I headed to my car and did some studying for school, then took a nap. When I woke up, I headed back to the field and checked out everything that was going on. They had various events that people were competing in, the one going on when I came back was "sit volleyball". In the middle of the field they had a very low volley ball net setup and had two teams of 6 playing each other…while sitting. I checked out the vendors that were there, various schools and military resources. The way it was described beforehand had me thinking there would be a lot of food vendors as well, but that was not the case. In fact they just had a big BBQ setup, but it turned out that lunch was not going to meet the commanders promise of "no later than 11:30". I was getting a little hungry and in turn a little grouchy, so I headed across the street to Subway and just bought lunch. If I would have known it was going to be setup like it was, I would have just brought my own lunch. It was going to take forever to serve everyone, once they even got everything going that is.

I headed back to my car and hung out until I could leave for my MRI appointment. At the hospital I checked in early and was taken in pretty quickly. Once I laid on down the tech asked me what kind of music I like. I said rock…he asked "classic rock?" and I said sure. He put some big headphones on me and then gave me a panic button to hold in my hand. Some folks get a little claustrophobic once inside and can use the button to stop the MRI and get pulled out. Once ready to go the tech went in the control room and then The Doors "People Are Strange" started blasting through my headphones. It was a little strange listening to that as they scan my brain. The scan took about 15 minutes and then I was good to go. I headed out and headed home.

One of the nice things about being back home is that I am close to family. My grandmother had to go to the emergency room and I was able to swing by the hospital after going home. One of my worst fears while being stationed halfway around the world for the last few years was not being able to be there for my family. They ended up admitting my grandmother overnight because it turns out she has pneumonia.

Email ThisBlogThis!Share to TwitterShare to FacebookShare to Pinterest
Labels: 25B, Army, medboard, MRI