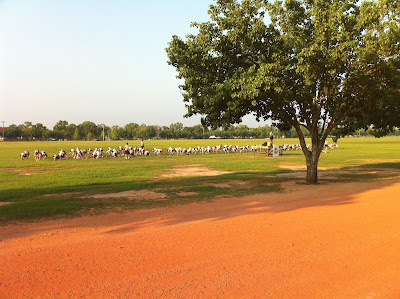 On our way to the IET center...this kind of gives you an idea of what PT
looks like (although the pic is pretty far away - I didn't want to look
obvious that I was taking their picture). You can see the soldiers
in formation and the sergeant in front leading.

Yesterday (Sunday) was so mellow that I didn’t even put in an journal entry. There was nothing really of note except I was able to get some much needed rest. The only thing that was a little crazy was that a girl our roommate likes (I can’t quite call her his girlfriend yet), got into an argument with Sgt. Cujo and she ended up trying to commit suicide. She went to the hospital and our roommate left to go visit her. Last update we got this morning is that she is doing OK now.

Today was pretty mellow as well. We had 30/60 sprint/walk-jog for PT this morning. Then a leisurely breakfast and a nap at the IET center as usual. We then went to class and spent most of the time studying on our own for the test tomorrow.

Ate dinner and then formed up for the march to RBK. We have a lot of new people now at RBK, so it will be interesting to see if they step it up and keep the high standard that we have here. We did not get a replacement for the guy who left our room so as of now we only have three people in here.