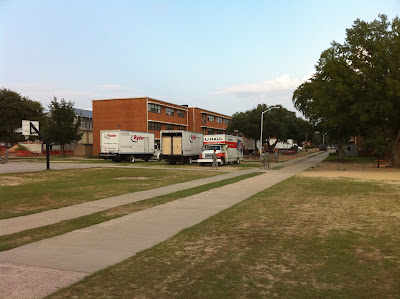 A photo of the Charlie barracks during the remodel. There are a number
of trucks as well as some lifts behind them. Looks like they are doing
quite the remodel.

This morning I woke up a little confused for some reason. I didn’t understand why my alarm was going off so early, for some reason I thought it was the weekend. So I was a little disappointed when I started thinking clearly and saw “Tuesday” on my phone.

PT today was muscle failure day. We did a number of push-ups and sit-ups until we basically couldn’t do them anymore. My arms felt like wet noodles when we finished. It was a pretty good workout!

We did all our duties and ate another leisurely breakfast, then headed over to the IET center. I took a nice nap, but was prematurely awakened by a battle buddy warning me that a sergeant was in there and walking around waking people up. Grrrrr!! I woke up PFC Metal so we were both awake by the time he came around to our area. He asked why we were there and what company we were with etc. We told him we were in software and didn’t have school until noon. He then moved on to mess with other privates. He ended up making about 8 people leave. I’m not sure why, they must have been there when they were supposed to be somewhere else. One thing’s for sure, I’m getting tired of having my nap time getting interrupted LOL.

School today we reviewed and prepared for the upcoming test tomorrow. The instructor also changed things up a bit and had each half of the class play against each other answering questions about CLI. Our team was up until the final question, where we bet everything and lost....so we had to clean up the room before we left.

After class we learned that we are supposed to have some extra training every Tuesday. So after dinner we had to gather as a company and the sergeants went over the 9 line medivac report as well as the basics on using some high speed walkie talkies. That lasted about 45 minutes, then we marched back to RBK.

Once back at RBK SGT Pineapple started giving us another speech. In a nutshell he told us that we need to get used to wearing our Camelbaks. If we don’t, then we’ll die down range.

Overheard Quote: “Is there a secret photographer out here?” (Sgt Kent during PT wondering why everyone was looking like they were posing during the cool down stretches)

My son is headed to Ft Gordon End of Sept and I know in a earlier Blog  you said talked about where to check in/report.  Can you send me that information.  We will be driving him from Benning to Gordon and I like to have an idea of where to go.  Thank you for time and the job you do. my email is moorl69@hotmail.com

Not sure if your son is a 25B or not. If he is in the 15th Signal Battalion he will check in at headquarters located on Barnes Ave right after 27th street. (See link below). When I was released from basic they surprisingly didn't give me any information on where to go. Luckily I knew someone who arrived before me and I was able to call them and ask directions on where to go.

Let me know if you have any more questions,