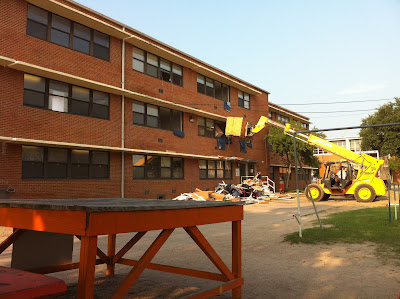 Another photo of the Charlie company remodel. They are moving
new beds up to the rooms.

Standing in morning formation before PT is somewhat torturous. While we are standing there going through roll call, we can smell the bacon cooking from the RFAC which is right around the corner. This is all happening while everyone is standing there with an empty stomach. LOL

PT this morning was another AGR run which I ran in C group again. This time the group was a little bigger and we ran at a faster pace. At the end we did some sprints, so by the time we were done I had a good sweat going. We ran around the smaller track around Barton field which I hear is about two miles.

We had the typical morning, leisurely breakfast and a nap at IET center. This time we were not interrupted which was nice. We have a test today for CLI, so having a nap before hand and going in well rested was important to me.

I went to class after lunch and we were able to do some last minute studying for an hour before we took the test. The test consisted of about 30 items that we had to do in the command line interface. All were Unix commands and were pretty straight forward. I ended up messing up one of the steps so I only got a 96.5% on it. There was only one person who got a 100%. I should have too, but I made a stupid mistake...oh well, next time.

After the test we had to go over to another part of the school and we ended up having to do detail until it was time to head back to class to be dismissed. If I would have known that I would have taken longer on the darn test.

On the march back to RBK the sergeant did something pretty funny. Out of the blue he tells the road guards to catch him a goose. There are a number of Canadian geese that like to hang out around Barton Field. So the two road guards to running around chasing after these geese. Picture two guys with bright orange vests on with their hands stretched out trying to catch geese. It was pretty funny. I wondered what the people driving by were thinking..LOL.

The laughing stopped when we arrived back to RBK. The sergeant told us that the brigade commander and a number of other brass are coming through to inspect our barracks tomorrow. So the sergeant said we had to clean the barracks until lights out. That means no personal time at all tonight. That pissed me off a bit, sucks not to be able to talk to my wife before I go to sleep.

Overheard Quote: "That middle toilet looks like someone poured caramel syrup in it" (PFC Metal after he was cleaning the toilets complaining about a poop stain that circled around the bowl of the toilet)