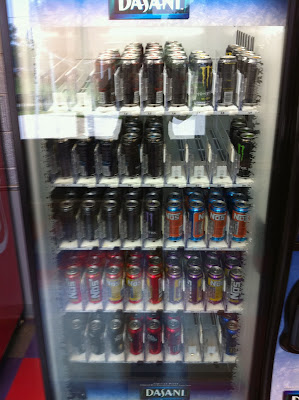 One of the vending machines at the IET center. All it contains is different
types of energy drinks...LOL

Today for PT we did something new. We were released in random groups of 6 on a run. We were supposed to all stay together and run down the road to a certain point and run back. We had to keep doing this until told to form back up. Somehow I ended up with an entire group of Latinos. After a while they started doing cadence in Spanish. Uno....Dos...Tres...then they started saying a bunch of other stuff and it would start over at Uno. After a while of this I decided to chime in with my own (I can still remember a little German)....Eins...Zwei..Drei...Sie alle sind Schwanzkopf ja. Eins...Zwei...Drei...Du kannst mich blasen.

Speaking of Latinos...Its pretty amazing how many there are in the army. Well I should say at Fort Gordon. I'm not sure if its the same in the entire army, but there is a lot here. It seems everywhere I turn I hear people talking in Spanish. Makes me wish I took some Spanish back in the day, I have no clue what everyone is talking about.

In class today Pvt. Celtic had his phone taken away by an NCO (because were not allowed to have it in school). It was given to our instructor for safe keeping. At some point the instructor gave it to our class leader to give back to Pvt. Celtic after class finished. Well our class leader decided to turn on his phone and update Pvt. Celtics facebook status to "I'm feeling a little gay today". Needless to say Pvt. Celtic didn’t realize this until hours after class had finished. It was pretty funny.

After class we had to eat dinner pretty quick in order to make it to the safety formation at 18:00. The brief was pretty normal stuff (don't beat your wife or girlfriend, don't drive drunk, be careful). The captain also mentioned that in the 15th Signal Brigade there was a suicide this last week and to keep an eye out for our battle buddies. We were also informed that the 15th Brigade also has the highest STD percentage at Ft. Gordon. To help battle this they are providing free condoms, at least at Charlie company. There is now a box full of condoms next to the CQ desk!

Right near the end of the safety formation it started to rain...pour down rain I guess is better wording. The rain drops were pretty huge and started falling like crazy. Everyone went into the day room or into the rest of the barracks to start cleaning. The people that live at the company will be moving back this weekend now that the renovation is complete. I'm glad I don’t live there...there is going to be a lot of cleaning all weekend long there. Free time will be pretty limited with all the moving and cleaning.

We had a nice surprise, the duty vans pulled up to the front door and picked us up to drive us over to RBK. Wow...I wasn’t expecting this. Like most good things that seem to happen here, it was followed by a bad thing. When we arrived at RBK we were told we could change and then to wait in the hall for room inspections. We waited....and waited...and waited. Are you kidding me? Its Friday night everyone is itching to get away from this place and we can only sit in the hall outside our rooms. 2.5 hours later (no joke) we were told that we were released. No inspection...nothing, just a sergeant with a power trip showing everyone who is boss. Things like this drive me nuts. I can't wait until I live off post and away from this kind of crap.
Our room did our own celebrating though. We have one of our guys moving out and back to Charlie tonight because he has finished. Once you finish school you have to move back to Charlie until you leave post for good. We all had some Crown and Cokes to celebrate. I was feeling pretty darn good by the end of the night. I can say that I slept well too.

Overheard Quote: “You better get your doggone doggone” (Sgt. Kent during PT, the sergeants aren’t supposed to cuss anymore. This makes doggone one of the preferred words to use. Sometimes it gets used a little too much...lol)