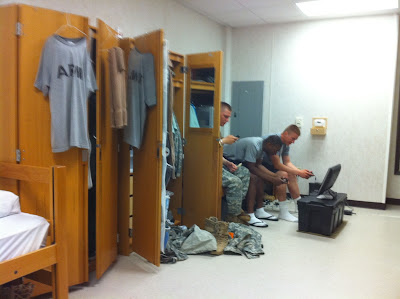 My roommate and a couple of his buddies playing XBox. They break
out the XBox a few times a week and play.

PT this morning was circuit training. We split into groups and did a certain exercise for a set period of time and then switched to the next station and so on. This was perfect because I felt like crap still and this type of training allows for a person to sham if they want. (shamming is a word used a lot here for someone who gets out of doing stuff or does the absolute minimum as possible to get by). I am not a shammer, but during PT this morning, I shammed as much as possible. I need to recover.

The test for our CCNA2 class was similar in structure to our CCNA1 test. There is a hands-on portion and a written portion. The hands-on portion took place first. It used Cisco's Packet Tracer to setup routers with a specific routing protocol. We had to tweak them a bit and when we were finished we had to leave it up on our screen and leave the room to the student break area. So we pretty much hung out in the student break area until we were dismissed for lunch.

When we got back from lunch we did the written portion of the test. We also found out how we did on our hands-on portion. I initially scored an 85%, but the teacher gave everyone 5 points because of an error in packet tracer. So I ended up with a 90%. Not horrible, but I expected a 100% so I was a little disappointed. I feel I was docked points for some questionable grading, but it's not that big of a deal. The written portion is straight from Cisco's website and it is all multiple choice, so there is no question weather you have the right or wrong answer. Also once you submit it you see your score immediately. I scored a 91.2%, this gives me a total of 90.6% for the class. Not too bad. Back to the student break area to wait…and wait.

We marched back to RBK this evening just as rain drops started to fall here and there. Right as we got inside our rooms the rain just started pouring down. Thunder was so loud I could feel it. We made it just in time. It's so nice getting back to the barracks and having time to unwind. I can get used to this!