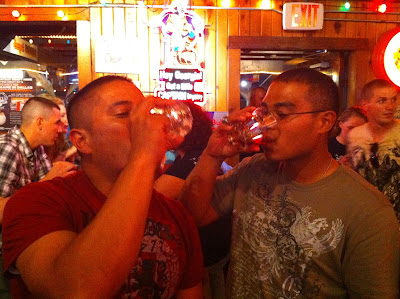 Ahhh...the weekend, it’s so nice to sleep in and not have a morning formation until 8:30AM. The day was pretty laid back, did my laundry and a little SkillPorts (this is the online learning that we have to have all completed before week 12). I had my Pop Tarts for breakfast and later on in the day went to the PX with the young hawaiian for lunch at Taco Bell. Volcano Tacos are a gift from the gods. I love those things, add a little fire sauce to them and they kick butt.

The big plans for this evening were watching the UFC 117 fight Silva vs. Sonnen. PFC Metal’s wife came to town so we didn’t have to rent a taxi to get off base which was nice. We made a quick stop by the tattoo parlor to check out their shop. I think I’m going to get another tattoo, unlike a lot of the guys here I’ve been thinking about it for a long time and I have the artwork already of what I want. I chatted with the artist there and he is their shading specialist, so I’m excited about getting it done. Now I just have to schedule a good time to do it since it will take about 3 and a half hours.

Next stop...Hooters. We arrived almost three hours early so we could secure a seat for us and three other soldiers that were going to meet us there. To go with my theme of hot freakin’ food I ordered the boneless buffalo wings - level of hotness = 911! I think my entire face heated up, but they were so darn good. Add to that a few beers and it was a good night. We ran into some guys from our platoon back at basic (Lurch and Skeletor) who were there to watch the fight as well. They seem to be doing well and it was good to catch up with them.

The fight card was pretty good and watching with a big crowd is something that every UFC fan should try to do. It’s awesome to have all the cheering and jeering going on while the fighters attack each other.

We left after the second round of the main event because we had to be back in our bunks before bed check at 1AM and we were cutting it close. I thought Silva was going to kick Sonnen’s ass, but it turned out Sonnen was the one doing the ass kicking. We didn’t want to miss the fight, but it was a little more important to not get into trouble either. We jumped in the car and headed back to base cursing at every red light we had to stop at. Finally we made it back and came running in with 2 minutes and change to spare. Once we arrived the sergeant on duty informed us that Silva came back and won the fight with a submission. Wow, I wish we could have seen it. I guess I’ll watch it when the DVD comes out on Netflix.

Now I get to sleep for a bit before my weekend hall guard shift starts at 6AM. The weekend shifts don’t happen too often because they are 6 hours long. So I guess that’s the good and the bad. At least I’m getting it out of the way now so I won’t have to do another one for a while.

I'm loving the blog. I wanted to give you guys a free UFC ppv secret. You can go tohttp://www.squabbles.com and watch them streaming for free. It's a no BS, no spyware website. Just free violence.

Cool...I'll have to check that out.