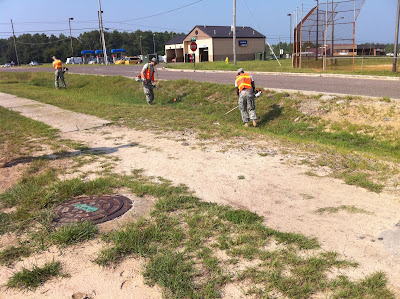 We had no PT this morning, but we did have to dress in our PTs and report to formation at the normal time (5:15AM). It is the first day of civilian school here in Georgia and I guess they let the NCOs have the morning off to get their kids to school their first day and make sure everything goes smooth for them. I was thinking this was pretty awesome so far, but it got even better after roll call. The sergeant said words that I’ve never heard come out of any sergeants mouth...”you guys can do whatever you want, you can even go back to sleep” We just had to make sure we were back for a 7:30 formation. This was great. I am finally getting over my cold, so one more day without PT is perfect.

I had a great breakfast. I ate slow and even had coffee. There is always FOX News going on in the RFAC where we eat. It’s pretty conservative and I think it's always a hit with the soldiers. There are always a few around making comments with every story that comes on.

At the 7:30 formation I was in for a little surprise. While everyone else was told they can hang out and do whatever they want until the 10:40 formation, me and 7 others were “voluntold” that we had to do detail. The guy picked us at random and said “don’t worry, you guys will be done by 9”. Right then I thought BS! It’s never that easy. We had to pick up trash, sweep, spray down the stairs, and weed eat. I guess the command sergeant major is coming by later on, so everything has to look nice. We finished everything at 10:15, so I got a little break before the formation.

We formed up and went to lunch, then to class. The class is still Windows Vista. I’m not going to lie...I fell asleep. It didn’t happen just once either. In fact I think about 3/4 of the class fell asleep at some point. Our instructor just told everyone to work on the practical exercises. (installing vista and setting up users and groups) That got old really quick, which is why so many people were looking at the back of their eyelids.

Finally class ended and we marched back to eat, then back to RBK. So nice to get back and not have mandatory study hall. I actually have a bit of time to wind down.

do you think "Volentold" would work with the kids?