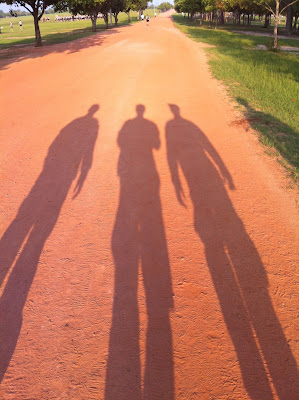 Walking on the Barton Field track on the way to the IET center
on our last day with the software schedule.

PT this morning was muscle failure along with some extra core workouts. We did a lot of push-ups & sit-ups as well as the “4 for the core” exercises. Today’s muscle failure was not as bad as last weeks. I think we did a few less sets all together, but it was still a good workout.

Today is a sad day...it’s the last day of our software block. This means we will be back to the normal 8-5 schedule of school. No more leisurely breakfasts or long naps at the IET center. We tested out of Solaris Admin. I took the test and was the first one finished, I had to wait outside for about 10 minutes or so before another person came out (I needed a battle buddy to go to the break area and wait). We then had to wait about 2 hours while everyone finished and the tests were all graded. We then went back in and were told our scores. There were two people that got 100%. The instructor asked the class who they thought were the ones. Everyone said me and another guy that sits next to me. The instructor said “good guess, but neither of them scored 100%”. Bummer. He ended up telling the class who it was and then started calling everyone else up to get their scores. I ended up making a stupid mistake (I actually misread a question and scheduled a cron job an extra day), so I scored a 96.6%. Still not too bad. Next class is VOIP (Voice Over IP with switches).

After that we ate dinner and marched back to RBK. There were rumors that we were going to take our Phase V+ test here at RBK, but so far we haven’t heard anything. I’m hoping we will be able to take it at some point this week. It won’t make much of a difference this weekend because I should have a pass for the four day weekend.

Babe, I love the photo to this entry. Muah.