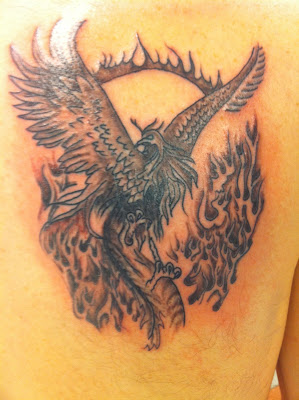 Today is tattoo day. I made an appointment earlier in the week to get a tattoo for noon today. I’ve been planning on getting this particular tattoo for about a year now. It took me a while to find a design I liked, then I wanted to make sure I went to a good shop to get it done since I’ll be wearing this forever. There are a number of guys who get tattoos here in the army. After checking out a lot of their work I decided on a place called Ink Sanity which is pretty close to the base. I am getting a phoenix. I thought it would be cool because my son’s name is Phoenix. Also it may have another meaning in some sort of sub-conscious way, a phoenix rising out of the flames...a new start just like this new start in my life as a soldier.

So after morning formation we ran some errands and ate brunch at a local restaurant. Then it was time to get a taxi. I thought this would be an easy thing to do since they are everywhere here on base. In the normal world you hail a cab, jump in and tell them where you want to go...then they take you there. Not so here on Fort Gordon. These guys want to squeeze every dime out of each ride they give. I got in a cab and the guy wasn’t too happy that it was just me going off post. (My battle buddy PFC Metal was meeting me there). So the cab driver started driving me around base until he found two others that were going off post. We picked them up and then he came across another taxi and asked if he could take us. OK fine, so we all jumped in his taxi. This new guy starts driving around looking for more. OK great. My appointment is at noon and the place is only a 5 minute drive. I’m now starting to wonder if I’ll be getting there on time.

We pick up another guy and finally the driver decides this will be worth it for him and he starts to take us off base. Right before the gate he says his wife is going to pick us up at the gate in her taxi and take us the rest of the way. Strange, but I don’t really care because it’s all the same flat fee no matter what. So we all get out again and hop in another taxi. As the wife starts to take us out the guards at the gate stop us. I guess the taxi wife isn’t allowed to pick up soldiers from base (didn’t have the permits or whatever). So we have to wait there while her husband comes back and we transfer back to his taxi. He drives us to the first exit where we all get out and transfer back to the taxi wife. WTF??? This makes 4 transfers just to get off post, what a pain in the butt.

I ended up getting to the tattoo shop about 15 minutes after noon. The guy started my tattoo and got all the outline done. He then had a couple of appointments he wanted to do and asked if I could come back at 5. I was in no hurry, so I said that was fine. We went and had a few beers, then went back and finished up at 4:45. The whole time we listened to Metallica which happens to be my favorite band, so I couldn’t have asked for a better tattoo experience. The tattoo looks pretty cool!

I decided to treat PFC Metal to a movie since I drug him along on this journey (we have to have a battle buddy at all times even off post). We went and saw The Expendables - turned out to be a great action flick with every action star that has been in the movies for the last 20 years. It was pretty cool seeing all those guys together in one movie.

We took a taxi back to base and this time we grabbed a taxi outside the movie theatre, but he could only drop us off at the gate where another driver picked us up. I guess one transfer is better than four.

Howie's cajun crust pizza is on the menu for dinner tonight as well as doing my laundry before bed.