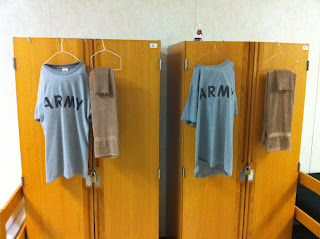 Notice the towel on the left locker (not centered) and the shirt on the right had the shorts
underneath folded up too high. Our roommates were docked for these minor infractions.

All the people in my class had early school today, so no PT. This is still a good thing as I am feeling pretty crappy still. We lined up for formation and fell out once roll was called. I thought we would be marching over to the school because we were going early, but to my surprise the sergeants scheduled the duty van to give us all a ride over. It took three trips because there were a number of people in different classes having early school as well. I ate breakfast over at the Charlie DFAC and then headed to school.

We started the software portion of the schedule. Before we went into class though there was a shakedown. Oh great! I never bring any contraband, but today I decided to bring my phone because I knew I would have some down time after class and before we had formation to head back to RBK. There are a number of people that bring their phones every day as well as who knows what else. They gave everyone a time to bring any contraband up and put it in the amnesty area. I went ahead and took my phone up to the front, I had no where to hide it unlike the other people who bring theirs all the time. They have become experts in hiding their contraband. There were a few others who brought up phones and a number of people brought up cigarettes. They took it all and then searched everyone and their stuff.

We then started class. The software branch chief came in and and told us over and over that 25B is the best MOS in the army. He basically told everyone about what he has done in the army, the certifications he has and the education he has received all courtesy of the US Army. He encouraged everyone to get as much out of the army as they can....good advice.

The class started...Windows Vista. It was a joke, even for a Mac guy like me. The class is going to be two days long and from what I can tell it is just about installing the OS and configuring users and groups. The instructor rushed through all the slides and we were done by 11AM. We found our our software class will normally be from noon to 6PM each day.

Now those of us who turned in contraband were told to go see the sergeant who collected it all. Everyone was worried about getting a negative counseling statement or at worst an article 15. Turns out that we ended up having to do 30 push-ups and then we got it back.

We left for lunch and then ended up heading to the IET center to hang out. We can’t go back to our barracks until 6:30PM. With all the down time during software it looks like this may be my new home away from home. It’s a pretty cool place, they have a coffee bar that also serves various food items. They have video games, pool, TV, and most importantly air conditioning and lots of places to sit and rest.

PFC Metal’s wife came to visit and gave us a ride to RBK. We waited for the formation to arrive in her air conditioned car. I saw a group of people and thought it was the formation. So PFC Metal and I jumped out of the car and headed to the barracks. Unfortunately this was not the formation, the sergeant was telling these guys they are not allowed to come over to RBK early and need to come over with the formation. Then the sergeant saw me and PFC Metal come walking over. We were told that we better beat him to the formation back at Charlie and march back with them. Grrrrr.... so we ran across Barton field all the way to Charlie, then marched back with the company.

We were then informed to stay outside of our rooms back at RBK. There was a room inspection and the sergeants were going to go call out the ones that failed. Our room had two that failed for some very minor things. Because of this PFC Metal and a roommate had to be here for bed check tonight at 1:00 AM (this is only really a punishment for the roommate since he is phase V+) and they will also get their areas reinspected tomorrow.

I’m pooped...going to rest and hope this cold goes away soon. 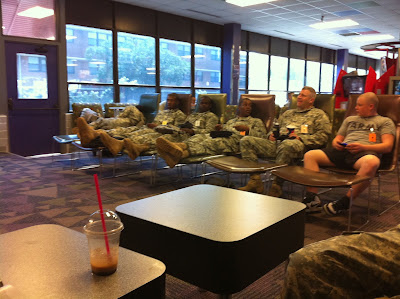 A view of some soldiers hanging out at the IET center. They are watching TV or sleeping.
You can see my iced mocha in the foreground...mmmmm

there is no picture of a towel or anything

ummm....mom it's that brown thing hanging on the hanger next to the PT shirt that says ARMY. (It's brown and has a little washcloth on it too) - The picture at the top of this day's entry.