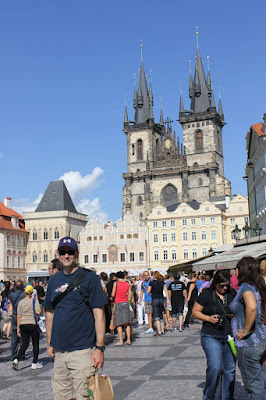 A photo of me posing in old town square

Saturday: With my wife here and being only 2.5 hours away from Prague in the Czech Republic, we decided to drive there and make a day of it. After a little research I found out that even though the Czech Republic is part of the Eurozone, they have not switched over to using the Euro as their currency. What does this mean? It means that we can travel back and forth over the boarder without restrictions, but we have to get some money exchanged to some Czech Korunas. I also found out that instead of using either taxes or toll booths like most other European countries to pay for their roads, they require you to purchase a small decal and place it on your windshield in order to drive on their freeways. At the border crossing we stopped and purchased the smallest available pass - 10 days for 16 Euro. We also exchanged 80 Euro to use as spending money while checking out the city.

The drive was pretty uneventful. We did borrow a co-worker's GPS which had all of Europe, unlike ours which is a little older and could only hold a map of Germany. I don't think we would have made the trip if we didn't have the GPS, it's just too scary trying to get around in a foreign country without one…especially one that I don't even know a single word of. The highway was very similar to the autobahn except the max speed limit was 130 kph which is about 80 mph. It seemed though that there were a lot of people that drove and acted as if it were the autobahn. I was getting passed consistently while traveling at 130 kph. At one point I was even going about 145 kph (about 90 mph) and a car passed me so fast that he must have been going at least 210 kph (130 mph). The drive to the city was mostly countryside with the occasional rest stop or gas station.

When we arrived in the city we found a parking garage that just happened to be under a very large shopping mall…my wife was excited. We ended up eating lunch in the shopping mall and then made our way around the mall checking out the shops. We headed outside and just started checking everything out. We headed towards the old town square and took in the scenery. The place is full of very cool architecture as well as people of all shapes, sizes, and color. There were also a lot of street performers around, which I love. The whole atmosphere of the city was just amazing, I loved just walking around and taking it all in. We stopped and had a beer outside at one of the local restaurants in the old town square. I had to try one of the local Czech beers, which was pretty good!

We walked around and eventually crossed the Vltava river across one bridge, then made our way back across again using The Charles Bridge. This pedestrian bridge was the first bridge used in Prague and is crowded with people, artists and street performers during the day. Along each side of it is a number of statues as well, it was pretty cool walking across and just taking it all in as I had been all day. We made our way back through the old town and eventually headed back to the car and made the trek home.

Being able to make a trip like this, especially at the last moment is one of the main reasons I wanted to be stationed here in Germany. I wanted to be able to take advantage and see all kinds of different places and people. When I was a teenager, the cold war was going on and the Czech Republic was a communist nation and part of the Warsaw Pact. I would have never even dreamed of being able to visit this country, but times they have changed and look at me now! Prague is definitely an awesome city that I'm sure I'll have to visit again. There are churches, museums, and the castle I'd like to go in next time…but this day trip was perfect for what it was, and I had a great time with my wife.

When we got back we decided to go to the movie on post and watch "The Bourne Legacy". What was funny is that I didn't realize that the character "Jason Bourne" isn't even in the movie (I hadn't seen previews or anything…just knew the name). It was a good movie and a perfect end to an exciting day.

Sunday: After yesterday, today is going to seem a little boring. My wife and I slept in, and then headed to the neighboring army post of Grafenwoehr. The Vilseck post (Rose Barracks) and Grafenwoehr are actually connected via a tank trail called "One Community Road". This makes the trip back and forth pretty easy because there is no travel outside in the city…just a back road through all the training areas. We visited the PX which is quite a bit bigger than ours in Heidelberg. We had lunch at the food court there and then headed back. Nothing too exciting, just a nice and easy relaxing day together.

My wife left a little after 1400. I then proceeded to do laundry and homework for both my ComSec class and my college class. Once that was done I watched "Awake". An interesting movie about a guy who is basically awake, but paralyzed after going under anesthesia. He can hear and feel everything that's going on, but can't move or say anything. Pretty crazy stuff!

You can check out a slideshow below (or visit my album on flickr):