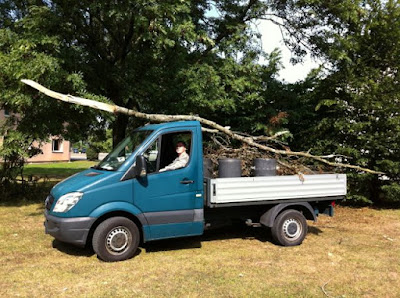 This morning PT was cardio in our summer PT uniform. I'm not exactly sure what the "normal" guys did because us profiles and special pops folks left to the gym before much got started. They placed a specialist in charge of the PT formation for the regular guys. The guy wasn't even ready for it, he was just told to get up there and do it. I know they want to give the younger enlisted a chance to do this sort of thing, but at least let them prepare and be ready for it. Also they should make sure that the person is someone who wants this experience…who wants to get promoted. If they forced me to go up there, I'd be pissed off, luckily I'm on profile and just do my thing in the gym…no impact…inside…with my headphones…the way I like it.

On my way into work I got a call from our platoon sergeant telling me that I have to go to do AIC detail. I was going to get my dental appointment taken care of this morning…the one that is due on the 30th of September…the one that they said I had to get done before my pass for the end of August will be approved. So now I can't do the dental appointment, instead I get to go play garbage man on PHV and clean up after all the pigs. So I dropped my wife off at work and turned around and headed back to PHV.

I had one helper, a PV2 from ironically enough…the dental clinic. We went around and did the normal cleanup of the garbage cans and the messy playgrounds. I swear parents here just tell there kids to just leave all their trash on the ground because we'll be around to clean it up eventually. There are usually small garbage cans located all over the playground, but nobody really cares. I think that part pisses me off the most. I don't mind cleaning up all the trash out of the cans, but all the random trash laying all over the place just pisses me off.

We then were told we had to pick up some "branches". I put that in quotes because when we went to take a look, we found what looked like entire trees that had fallen. Somehow this now became our job to pick up and take to the recycling center (where we take all the trash and waste as well). We did our best to break apart the branches as much as possible, but ended up loading a huge piece on the TMP. I was a little worried if the MPs saw me driving with this crazy long "branch" on our TMP I would get a ticket. I drove slow and had my hazard lights on…I also drove the long way around to stay away from the MP station. When we arrived at the recycling center they gave us a saw and told us to cut it at least into three pieces before putting it in there…having a saw would have been nice before we loaded it.

We were then told that we had to pick weeds…WTF? I was already a little pissed and that was just too much. It was like we had extra duty and we were being punished. Screw that! I took lunch and let them know that I had my physical therapy appointment to go to afterwards. It's days like this that just adds to the reason I will not be staying in the army after my contract is up. At this morning's formation our platoon sergeant was stating all the required training that needed to be done by everyone. He also went through all this other non-work related stuff that needs to be done. I joined to do my job…Information Technology Specialist, but it seems nobody really does their job…there is always other crap that needs to be done. I just shake my head and keep trudging along.

I ate lunch at my house…nice get to watch TV in my underwear (it was hot out and I needed to change for my physical therapy anyway). I then headed to my therapy appointment and did the usual…core and neck work, then the shock treatment with some neck massage afterward. Always feel good after that!

I headed home and caught up on this blog…(had to take a few days off because of my kids leaving and the 4-day), then finished watching UFC 149, which turned out to be a little of a disappointment all around. Most of the fights were slow and drawn out, then won by decision. I picked up my wife from work and after dinner we watched "The Grey". It turned out to be a little slow, my wife actually fell asleep. Staring Liam Neeson it's about survival after a plane crash in Alaska. The movie was "OK", but nothing special. I think I was just expecting awesomeness with Liam Neeson in it...no worries though, I'll send it back via Netflix and wait for the next movie to arrive.