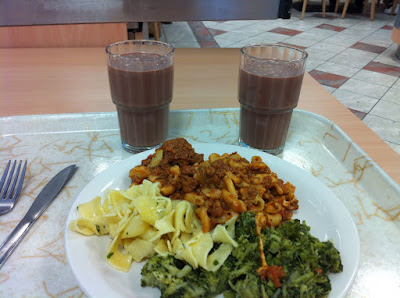 Eating DFAC food once again...at least they have chocolate milk!

This morning I woke up and was ready to go by 0630 so I could take advantage of the continental breakfast offered here at army lodging where I'm staying. I can get breakfast at the DFAC, but I didn't want to walk all the way there when I have the basics available to me here.

I arrived at the class and the teacher called each person on his list in one by one. He made sure they all had the proper paperwork and then had them sign in. For those that didn't have everything they needed it wasn't a big problem, they were just told to get it asap. I then checked in and found that the class was pretty small, so I would indeed be able to attend…I wasn't too excited, but I guess on the bright side I don't have to pay for my hotel room and then try and fight to get reimbursed by my unit. I had all my paperwork except for a memorandum stating my security clearance. Not a big deal, I was able to text my boss and ask him to email it to the instructor. While I was texting my boss I had to ask him to also call and cancel my motorcycle class….grrrrr.

Class started with the basics, introductions and a description of what the class will entail. We then were given all the paperwork required to maintain a safe. We also each had a three ring binder that was our "training safe". So we had to fill out the paperwork (combination, inventory, open & close, as well as an end of day checklist). So now we have to fill everything out as if we're opening a safe each day…pretty funny.

We then went through some basic slides and watched a couple movies. One of the movies was pretty interesting. It was about one of the most damaging spy cases ever uncovered. A guy named John Walker along with help from a friend and family sold the KGB massive amounts of secret and top secret data. His case actually changed they way we do ComSec now and is the reason everything is much more secure. What's crazy is that he would have never been caught except that he divorced his wife and she was pissed off at him and turned him in. (Here's the Wikipedia Page pretty crazy stuff!)

The class then went on and on and I did my best to stay awake. I hate ComSec and still a little pissed that I even got stuck doing this job. Whoever decided ComSec should be a 25B job should be tortured and slowly killed…it has to be the farthest thing from what I envisioned when I signed up for the army. In class we just went over reference manuals, documentation, and a bunch of other places to look up obscure crap I have no desire to know. I hate this…I hate this with a passion.

I had lunch at the DFAC and it reminded me of my time in AIT. This is sort of like AIT, but without the stupid formations and room checks…in fact I have a maid come clean my room and make my bed each day!

The rest of the day consisted of more suck in class. I did find out that they do not give certificates out for E-4 and below in this class. That is pretty funny because I'll finish the class and come back with no certificate…I wonder what my unit will think. They did say once a person gets promoted to E-5 they can call and have their grades uploaded so they can get a certificate. I don't ever plan on making E-5, so it looks like I'll be attending this class and have nothing to show for it…but I could really care less. I'm in a bad mood…I've been in a bad mood for a while now…and I've also still been experiencing major pain in the back of my neck and head. So on top of everything I'm still in pain all day long and my headache medicine and the muscle relaxers are not doing anything to help.

We were also given a massive amount of homework to do. So much so that I had no time to watch a movie tonight. I had planned on watching a movie each night at least for some entertainment. Instead I've been plowing through huge manuals looking for answers to questions that are hard to find. In other news I'm hearing from my friends that the "Men In Black"...well in this case it's the "Woman in Black" is interviewing everyone (to see if I'm a drug addicted closet terrorist/extremist) in order to get my clearance. I'm going to video chat with my wife for a bit before hitting the sack and starting all over tomorrow.

Email ThisBlogThis!Share to TwitterShare to FacebookShare to Pinterest
Labels: 25B, Army, Germany, Vilseck