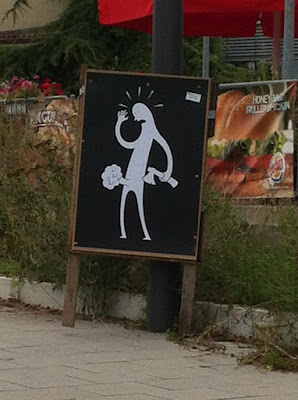 Just a random sign that I came across while driving in Germany....
I have no idea what it means???

PT this morning was on PHV. The regular folks did normal muscle failure PT out on the grass, while those of us on profile headed to the gym. I had a great workout using the machines and working mostly my back and core. If I can keep having a great workout like this inside at the gym, I hope I stay on profile for the rest of my army career. I get such better workouts when I do my own thing vs. the standard army PRT…plus I brought my headphones and was able to rock out a bit :)

At work I was able to send off more correspondence for my clearance. This is one of the things that just drives my crazy about the government and all the various offices. I had previously submitted all my paperwork and after a couple of days I was told that on one of the release forms, that the number "2" that I wrote when writing the date and signing my name didn't look very good. My number "2" did not have a long enough curve at the top and the bottom didn't loop well enough. My first "2" in "2012" was OK, but the second one was not good enough. Now that I've submitted my paperwork, I can't log back into the site and print off a new form to fill out and send in, I have to cross out the date on this paper and initial, then write a new date with a better looking "2". So I do this and send it in, but the problem is that when you make a copy of a copy, the page gets a little darker. So that second submission was rejected because it was too dark. I had to email myself the copy to my house so I could use Photoshop and lighten up the entire PDF, then submit it. I'm still a little in awe of all the crap that I had to do just for a stupid little paper with my signature and date on it. Anyways…it's in now, I'll wait and see if there is anything else they want to return if for.

It's Thursday and that means sergeant's time training…army training. I always hate army training with a passion…most of the time it's just training for the sake of training. To make it worse I was told that I had to give a class at the last second. I was pissed off! When I say training for the sake of training, I mean that they do "training" no matter if it does anyone any good or not…at least we did some "good training". The first class was done by our maintenance department on how to fill out a maintenance form. I have no idea why we did this class…our maintenance department has been shut down for months now and hasn't taken any forms since then, and will not take anymore…ever. So we are learning how to fill out a form that they used to take, back when they used to be an actual working maintenance department. Pretty flippin' stupid if you ask me.

Luckily because of the upcoming CIP inspection, I was pulled out before the class actually ended. This means that I didn't have to sit through anymore worthless training, and I also didn't have to give any stupid class. I then helped my boss and his boss get everything prepared for the inspection.

I had lunch in the food court, listened to music on my iPod and read a book…my escape for an hour and a half. Once back at the office I went through each of our customer's folders with SGT Mex looking for anything that is out of order…also called "scrubbing our folders". Since it was just me and SGT Mex doing this and we are both fairly new at doing it, we both learned quite a bit. Everything has to be perfect, all the paperwork has to be in order, we have to check to make sure people's DEROS has not passed, make sure they are up to date on their briefs, make sure signatures are all in the right places, make sure no memos are out of date, and that memos are signed by commanders that are actually still in command. We've had a couple change of commands, which is going to require some updating.

We had a new guy arrive today. He's an E-2 (PV2) and as tall as a house! The guy is freakishly tall…he sticks out like a sore thumb even standing in the back of the formation! I feel bad for him…just out of AIT as a 25B expecting to apply his new skills fixing computers only to find out that he's stuck in our office, where he will be doing nothing close to that.

Our platoon sergeant then was talking to me and a couple other guys about soldiers in general and about the stuff they can do that is just crazy. He said there were a bunch of soldiers that were in one of his previous units that did some crazy stuff right before they ETS'd (left the army for good). In the barracks they crapped in the microwave and turned it on to 99 minutes, they crapped in the oven and turned it on, and they also pissed in another oven…but didn't turn it on. Needless to say when the NCOs came in the barracks they said it smelled something awful…I can't even imagine. They said they had to throw away the microwave and the oven. The oven that got pissed in was left and when someone finally used it, it started stinking as well…they ended up throwing that one away too. The guys that did it were long gone by the time it was all sorted out…the sergeant major was pissed beyond belief. If there isn't one already, I think there needs to be a book written about all the stupid crazy crap that soldiers do!