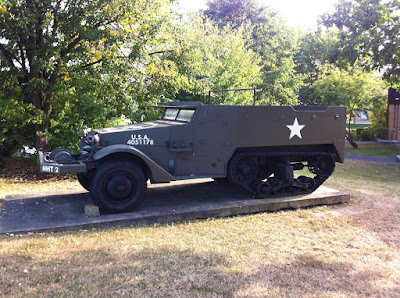 They got more than just tanks on display on this post

This morning was the same as usual, I've settled into a nice routine with plenty of time to get up and actually wake up before heading to class. This usually helps with me being able to stay awake, but today was especially difficult. It was not just me either, the entire class was having a tough time. At our first break an hour into the class at 0900 everyone couldn't believe we had only been in class an hour. The class is going over forms and what each field means, more dry stuff and I can look around the class and watch either everyone's head bobbing or looking down propped up with their hands so it looks like they're reading along in the manual…when they are actually sleeping. I think I actually fell asleep with my eyes open a couple times. I would be staring at the teacher trying to listen and totally zone out, after who knows how long I would zone back and and see her talking, but not know how long I was zoned out or what she was even talking about.

Each hourly break was the same, everyone complaining about how bad the class is and how hard it is to stay awake. We finally broke for lunch and I headed to the DFAC and then took a quick nap in my room after talking to my wife for a bit.

Back at class the teacher's switched out, and even though the material was still very dry and boring, this teacher was a little more engaging and lively than the previous one. Everyone suffered through the rest of class until we were finally released at 1600. I headed back to my room and read for about an hour before heading to the DFAC to eat dinner. The good news is we didn't have actual homework tonight, instead everyone had to come up with three questions that we will use for review before the test on Friday. I did that easy enough and then sat back, relaxed and watched "Beowulf". I was a little surprised when I watched it, because I didn't realize the entire movie was a cartoon. I really didn't care for it too much, it seemed like I was watching Shrek…but instead of funny it was trying to be a serious action movie.

Time to read a little and then go to sleep.

Overheard Quote: "You should never fight over a woman…and maybe only fight over your wife every once in a while" (One of the guys in our class giving everyone some wisdom during a break)

Email ThisBlogThis!Share to TwitterShare to FacebookShare to Pinterest
Labels: 25B, Army, DFAC, Germany