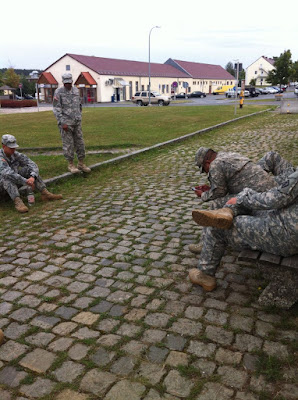 A normal break during class...everyone sits or stands around here
looking across the street at the post office checking out
and commenting on the girls

This morning started like all the rest, with my continental breakfast and then getting ready in my room before heading off to class. We picked up where we left off yesterday with the practical exercises. We did the remaining 3 scenarios taking a break between each of them and then taking lunch afterwards.

I had lunch at the DFAC as usual and I was glad that today would be my last day eating there for a while. Even though this DFAC has decent food, I have grown tired of the long lines and all the people. Sometimes when you are surrounded by a ton of people is when you feel the most alone. After eating a quick lunch, I headed to my room where I chatted with my wife for a bit before taking a quick nap.

Back in class we started our review, which was based on the 3 questions we each came up with earlier in the week. We played a little game where a person would ask one of their questions, and the person that answered it then in turn read one of their questions. This limited each person to only answering 3 questions and forced the entire class to participate…pretty smart thinking on the instructor's part. We then went through some questions from the instructors with people just shouting out answers. After that we finally took a quiz, this was the same quiz we took the first day of class. Afterwards we were given both our quizzes back so we could see how much we've improved. I scored a 70 on the first one and a 90 on the second…there's hope I may pass the final!

After that we were released at 1500 for "personal reflection". This was done so they could say that we actually did a certain number of hours for the week. For those that will get a certificate, this will give them promotion points. I headed to my room and read a little bit. I actually finished the second book in the Game of Thrones series, now I'm on to book three. I then took a nap before heading to the DFAC for my last dinner there…for a while at least. Unfortunately none of the juice machines worked and half the soda machines were out of order…that was a little frustrating, then to top it off I went to get an ice cream cone and the stupid machine ran out of ice cream without even filling up my cone! Stupid DFAC….grrrrr.

I headed back to my room and did some schoolwork before settling down and watching a movie. Tonight's feature was "Buffalo Soldiers" which had Joaquin Phoenix and Anna Paquin. It was interesting because the story takes place at an army base in Germany in the late 80's. It was funny to watch how they portrayed soldiers and all the drugs and crime that went on. I was laughing out loud at one point when an entire tank crew is high while out training and ends up driving the tank around a German town.