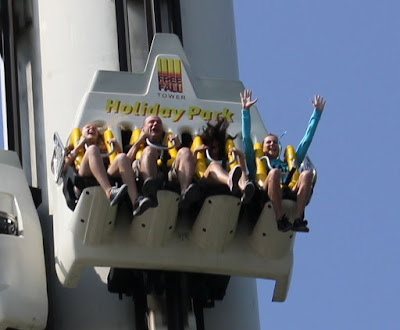 Friday: This morning we surprised the kids and took them to "Holiday Park". It's a smaller theme park than Europa Park (which we visited earlier), but it's also a lot closer (only about a half hour from Heidelberg). It's also cheaper, and for what it is, we had a lot of fun. We arrived shortly after it opened at 1000 and stayed until almost closing time at 1800. Spending the day at the park was probably the perfect amount of time to go on each of the adult rides at least once, and then let the kiddos ride their favorite rides over and over again. By far the best ride is the Expedition GeForce roller coaster. It had a long line, but we had a blast riding it! There are some smaller roller coasters, a free fall tower, a log ride and a river raft ride…so there was plenty to do and keep us busy all day long. It was a good day for all. 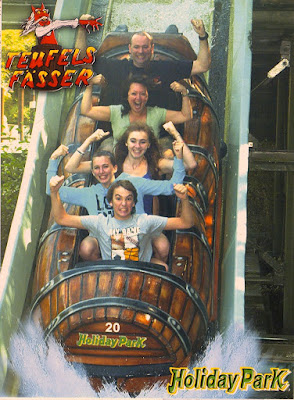 Saturday: We traveled to Rothenburg once again. This is probably one of our favorite cities in Germany so far and we wanted the kids to see it before they leave. Rothenburg is about a 2.5 hour drive from Heidelberg and is a great medieval town. The old city has a wall surrounding the city, which is where we started out. We walked a good portion of the wall letting the kids explore the wall and the city below. We then walked around downtown checking out the many shops full of all kinds of souvenirs. The kids loved checking out everything from medieval weapons to Christmas ornaments. Each shop is a little deceiving, they don't look that big until you enter and they seem to keep going and going…especially the Christmas shop. 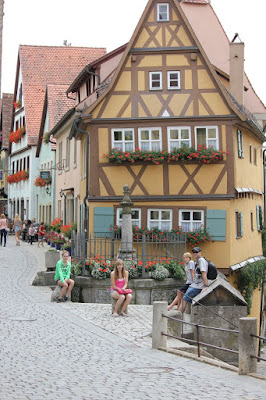 Hanging with the kids in Rothenburg

We were taking a bit of a gamble bringing the kids here hoping they would like "sightseeing", but it turned out to be great. We ate lunch at an awesome Italian restaurant, the only disappointing thing about the place was that we had to eat inside because there were no tables available outside. Rothenburg is a great place to sit outside and eat, you can "people watch" for hours. We then made our way to an ice cream shop before eventually heading home. 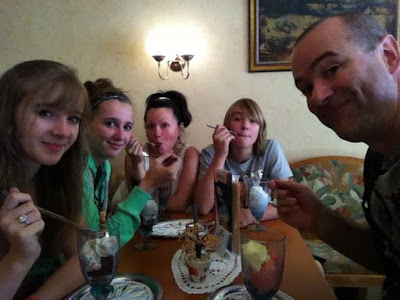 Sunday: We used today as a day of rest and packing. We took it easy and did a lot of laundry before packing all the kids suitcases. We did take the kids down to Heidelberg one last time and bought them each a souvenir to take home and remember Germany. We also had one last ice cream and walked around downtown enjoying the street performers and just taking in our last full day with the kiddos. 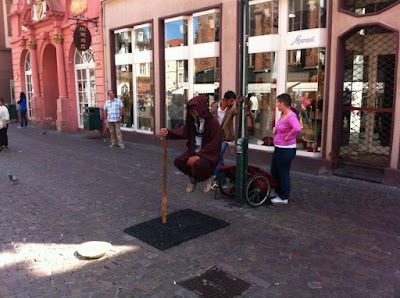 A street performer in Heidelberg that amazed the kiddos

Monday: Today I had to take the kids back to the airport. It was a pretty emotional day for everyone. We stopped by my wife's work and had lunch with her before leaving. We arrived at the Frankfurt airport 2.5 hours early…and I'm glad we did because the line at Condor Air was amazingly long. We waited and waited…folks that were in line for a flight to Vancouver were then allowed to go to the front (upsetting my impatient kids). We waited some more and then folks in line for a flight to Baltimore were allowed to go to the front (which upset the kids even more). We finally arrived up front after about an hour and a half waiting in line. We checked the bags and received the boarding passes. I was also able to get a pass to take them all the way to the gate which was nice. We waited in line for security and then made our way to the gate. They were already boarding by the time we got there, but it didn't really matter because they wanted all my kids to board last since they were unaccompanied. This gave us time to hug and say our good-byes. I then had to wait until the plane pulled out before I could leave…that really sucked watching them leave. It will most likely be next summer before I see them again. I wish the command sponsorship paperwork would have gone through, then at least I would have had one of my kids…but that is the government for you…slow as hell.