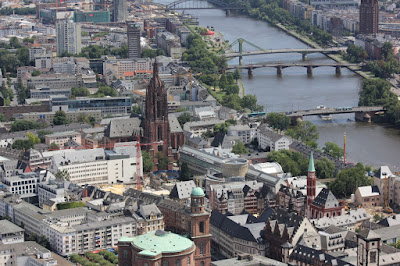 Saturday: This morning we got up with the plans to head to Frankfurt for a day trip. My girls have been staying up late watching movies and texting with their friends back in the states, so when I tried to get them up and they didn't budge, so we just left them. We took my son and headed off to Frankfurt. I've told my girls over and over again not to stay up late, they can chat with their friends all they want when they are in the states…why not take advantage of everything they can while here in Europe?

So my wife and I headed off with my son to Frankfurt, which is about an hour drive from Heidelberg. We first headed to the "Main Tower" in the middle of the city. This skyscraper is 200 meters, the building is pretty high and is very "visitor friendly". We purchased tickets for 5 euro each to take a ride to the top via an elevator. We were granted spectacular views of the entire city of Frankfurt and the Main River.

Our next destination was the Frankfurter Dom (the Frankfurt Cathedral), but along the way we ran into an Italian festival in full swing. There were plenty of vendors and music going on, so we stopped and had lunch. We then proceeded to the cathedral and checked that out as well as the Roman ruins outside of it.

After that we headed down to the river where they had a sort of carnival going on. There were vendors and rides all along the river. We checked everything out, my son played a few games and we all went on the ferris wheel. After that, we called it a day and started to make our way back to the car and then back home…a fun day had by the three of us.

The night consisted of "cosmic bowling" at the PHV bowling alley. By this time my girls were up and about and came with us. We met up with SPC Whirlwind and bowled from 2100 until after midnight. I say we, but most of us quit after the third game…then everyone except my son quit after the fourth game. My son continued to bowl six more games before we finally left! 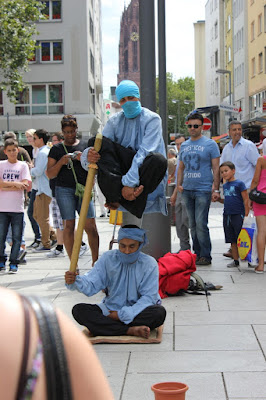 Sunday: Today we slept in, then had a big breakfast before heading out to "philosopher's way" in Heidelberg. This trail is long and offers many scenic views of the city of Heidelberg as well as the castle and the old bridge. We hiked up to "Thingstätte" the Nazi amphitheater at the top. This was built in 1935 by the Nazi party and was used for rallies and festivals. It's an amazing structure still and has great acoustics. We broke out our picnic basket and had lunch, but the most requested item was water…everyone was pretty thirsty after the long hike.

Not too far above the amphitheater is the ruins of St. Michael's Monastery. This place was built in 870! The place is pretty cool to walk around, and you can still climb up a couple of the small towers that are still standing to get an aerial view of the ruins. The top of the tower seemed to be the place to hang out and relax as there were a few German kids just hanging out up there talking on the phone and relaxing.

We made the trek down the hill (which is called Heiligenberg) and back to our car parked in a garage back in the altstadt (old city) of Heidelberg…of course on the way we stopped for ice cream and enjoyed the various street performers along the way back. I love just walking around the altstadt on the weekend….lots of people and things to look at. 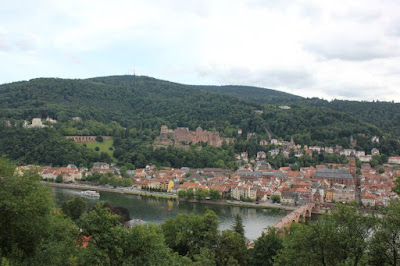 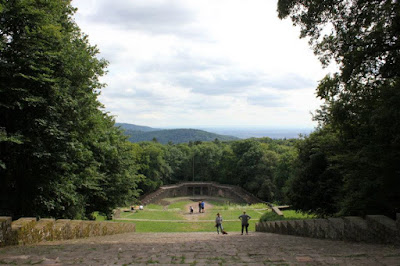 A view from the top of the "Thingstätte" a Nazi amphitheatre 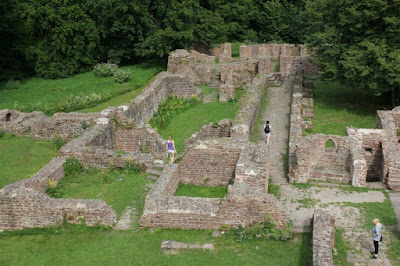 A view from one of the towers looking down at one of my
daughters and my wife exploring the ruins of "Klosterruine St Michael"
(Monastery of St. Michael)