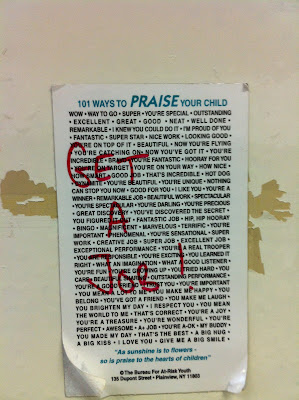 We had no PT this morning because of "Days of Excellence". One of the nice things about being assigned to the mailroom is that I do not have to go, however I did have to get up, get dressed, and attend a formation our company was having at 0645 before leaving. I can't complain too much though because with a donation to The Army Emergency Relief Fund we were allowed to wear civilian clothes all day. My boss actually made a donation for each of his soldiers so we could all dress in civilians without even having to think about it. So I showed up, waited around for a while, then went back home to get ready for the day.

I worked once again in the mailroom on my official last day being tasked out to help them. I had thought about wearing my kilt since it was civilian clothes day, but I think I'll save that for another day in the office. I spent the morning getting out mail that was not put in people's boxes the day before, then chatted for a while with the boss. I found out some interesting details on the work situation in the mailroom here. There are a total of 8 civilian employees that work there and only 3 of them are permanent. The rest are temporary, there is a hiring freeze for any permanent workers. The temporary folks time is limited and will probably be out of a job before the end of the year. I guess once you get a permanent job with the government, it's best to hang on to it for as long as possible.

I worked customer service by myself once we opened at 1100, my helper the SSG who is going to get med-boarded had some appointments to start the day. It was a lot more comfortable working in civilian clothes and I have to say that I also instantly got a lot more respect from everyone. It's a lot different when you look like a civilian rather than when you are just a PFC working behind the counter. Soon however I will be promoted to specialist, in fact I would have been "pinned on" today at the Days of Excellence but I wanted to have my wife there and she had to work. An easy enough excuse, so they will do a small ceremony with just the office next week. I don't even think any ceremony should be done at all because I did nothing special to deserve it, other than survive for 2 years. I can see having a ceremony for any early promotions or E-5 and above because they have to actually do something in order to get promoted. E-1 through E-4 is just time in service unless you get an early promotion.

So the day went by without any issues and the last couple hours I worked in the back sorting mail that will probably sit in sorting containers for about a week before they get delivered to their boxes. I used to work for UPS a long time ago and we had to make sure everything went out each day, so this is a whole new experience for me…and also why I keep mentioning it (it just blows my mind). I also took a break when my boss came in. We went outside and he gave me my quick monthly counseling statement. Basically good work and in the future he wants to start preparing me to go to the promotion board. I really have mixed emotions about that. On one hand it will be nice to have the higher rank and be an NCO, on the other hand an NCO has a lot more responsibility and crappy work they have to do. It seems NCOs get tasked to do training that has nothing to do with their job, they get tasked with all sorts of other miscellaneous things, and also have a whole level of supervisory work that needs to be done. This means if I ever do get to a place that actually does I.T. work, the chances of me doing it as an NCO is drastically less…and I have no desire whatsoever to stay in the army. We'll see how it goes.

I went home and after my wife and I ate, we left to Mannheim to go watch a movie. Here in Germany at the Mannheim Cinemaxx theatre, they play movies in English and you can also reserve seats via the internet. My wife reserved the seats and we went and watched "The Hunger Games". The theatre is much nicer than the one on post and it also has stadium seating which is also very nice. We had both read all the books, so we were excited to see the movie. The movie was pretty good and kept pace with the book for the most part, but there is just so much more detail in the books. I can see where someone who hasn't read the books may not get as much out of the movie than people who have already read the books. My wife was surprised they served beer in the theatre, I had to remind her we are in Germany…they even sell beer in the McDonalds here!