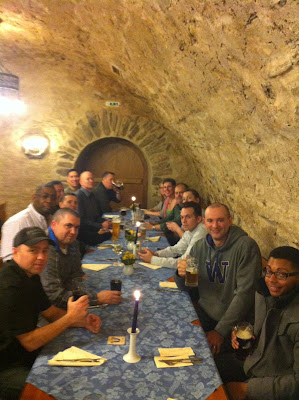 This morning I headed to the DFAC and didn't even bother with the meal line, I headed straight to the cereal and fruit, then grabbed some OJ and coffee and called it good. When I got back to the barracks and was getting ready, I kept hearing everyone say just how bad the food was…it was worse than yesterdays.

The day was pretty easy since we had most of the work done yesterday. We finished up one of the rooms that we had trouble in yesterday. A bunch of the hard drives were bad, so we had to get new ones. Once that was done we just stayed in the room and surfed the internet. We went to lunch and I grabbed an MRE like yesterday, but only ate a small piece of a muffin out of it. I snacked on some almonds and crackers that I had already as well.

Back at work we did some cleaning up and then double checked everything once again. We then did some more surfing as we waited to be released. A little after 1700 we all met up expecting to get released, but instead the place went on lock down. The laptop used to push out the images was missing and nobody was allowed to leave until it was found. I don't think anyone would want to steal it, it's an old piece of crap Windows machine…it serves it's purpose, but I doubt anyone would want to take it. We waited and waited and then around 1830 we were allowed to leave only because there was an appreciation dinner offered at a local German restaurant for anyone who wanted to attend. I can never turn down free food, so of course I went. A lot of people have grown to really despise our NCOIC so nobody wanted to go. It turned out that two others decided to come along, but the entire air force group and the others in our group didn't want to have anything to do with it because our NCOIC was going to be there.

Our NCOIC is a horrible project manager, but at first I thought he was a nice guy. I've since changed my mind…he's really obnoxious and thinks he's the smartest guy around, when in reality it seems he's a moron. He has all these crazy theories and goes on and on about stupid stuff. The meal turned out to be great though because it involved a number of people besides just the help desk. All in all there were a good 25 to 30 people there for the appreciation dinner. The restaurant was great, the food was great, the beer was great too. They were also a small brewery and served their own beer which I had both a light and a dark. All told it was well worth the minor inconvenience of having to travel there with our NCOIC. The place is called BräuWirt and I would recommend it for anyone in the Grafenwoerf area.