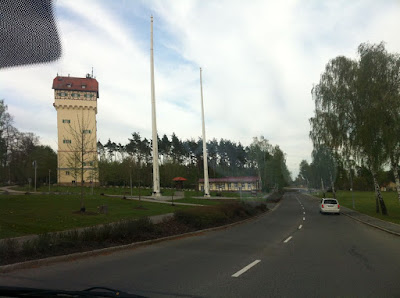 This morning I slept in until 0745. I could have slept longer, but nature decided to call early and when that happens the bathroom is not just in the other room here. Once the trip is made 50 meters to the bathroom and back (outside), you're pretty much up. I listened to music on my iPhone for a while waiting until the shoppette opened up at 1000. I planned on doing laundry today, but I had to get out cash, then buy a little snack for breakfast to make some change (the ATM only spits out $20 bills). Once that was done I headed to the laundry mat to wash my clothes in the coin operated machines.

Back in the barracks we found out that the room we were all in was reserved for E-8's and above. These folks would start arriving today or tomorrow and we had to get out. Nice…I wish we would have been told this earlier and had us just move into the other building. Now there are already people in there and the good spots next to the few power outlets are all taken. We all packed up our stuff and moved the 30 meters or so to the new building. The one benefit is that it's a lot closer to the bathrooms. The main drawback is that there are a number of people in there along with some NCOs. It's always a gamble with NCOs, they can be cool or real assholes. So there is the potential that the next couple of weeks could really suck. Our NCOIC is not much of a project manager, but he seems like a nice guy otherwise and he never bothered us in the barracks.

I ended up getting a bunk next to a guy who had his playstation plugged into a transformer along with a couple power-strips, so I am able to reach my power cable to it which is perfect. The other guys ended up buying some long extension cords to reach their bunks from the other guy's power-strips. I do learn something new every time I do go on an FTX though. Last time I realized that I needed to bring a pillow, a blanket to cover the mattress, and a power-strip. I see now that bringing a couple extra blankets will come in hand to drape on either side of the bed for some privacy. There are a couple guys in this bay that are doing it and it looks like a good idea.

Me and my co-workers took a TMP to the food court where I had Pizza Hut of course. We all brought our laptops and headed to the USO to make use of their free Internet. There is nothing else really to do except hang out in the bay, so this worked out well. We spent a few hours there and I kind of video chatted with my wife. I say kind of because the microphone on my headphones is broken, so I could hear my wife, but she couldn't hear me. I had to type everything while she talked to me…kind of a one way conversation, but it was nice to see her and hear her voice. I may have to look into purchasing a new pair of headphones with a microphone before next weekend.

We left and the others ate dinner, but I was still full from the pizza and cheesy bread. I just ended up eating some trail mix later on back in the barracks. Once back everyone started coming back in the barracks and it filled up a bit. What a difference from our previous bay which was relatively quiet. There are conversations everywhere and someone is bouncing a basketball. Hopefully it will quiet down at night, but I'm sure the morning will be noisy with people getting up to go to the gym.

I settled down in my bed and watched "What Happens in Vegas". A chick flick about a couple that meet in Vegas and after a night of drinking, get married…oh and they win 3 million dollars on a slot machine. Instead of giving them an annulment, the judge orders them to work on their marriage for six months with required weekly marriage counseling. It's a typical romantic comedy and runs through the same routine that all romantic comedies go through and yes in the end they live happily ever after. It's a decent watch and had me chuckling a few times…always nice to veg out and let your mind escape this boring place.