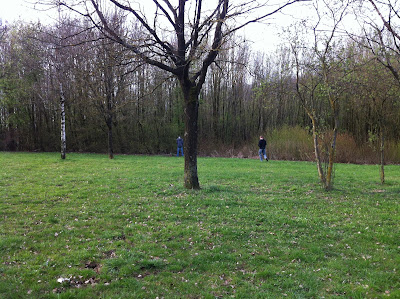 A typical rest area along the autobahn....some have bathrooms
and some let you use the old fashioned bathroom....the woods!

My sergeant had called me yesterday and let me know that I didn't need to come to formation. He would be picking up the TMP and coming back to pick me up with SPC Whirlwind. We were all wearing civilian clothes because we were traveling a long distance off post. So this was a nice surprise, I got to sleep in a bit and I was able to wear regular clothes.

They picked me up around 0700 and we took off in the TMP. I spent the ride drifting in and out of sleep. We stopped at a German rest stop along the side of the autobahn. The rest areas are a little different than I'm used to in the states. Some are normal with a small bathroom and some park tables and benches, but others like the one we stopped at didn't have much of anything. If you want to go to the bathroom you "utilize the woodline" which is what all of us did.

We made it to Grafenwoehr and onto the main post in about 3 and a half hours. We went and checked out the PX which was a lot bigger and nicer than ours in Heidelberg. We ate lunch in the food court and as we were leaving we asked some MPs how to get to the actual camp we were looking for. Turns out it was pretty close to where SPC Whirlwind attended Warrior Leader Course (WLC). Once we arrived shortly before noon as stated on the message sent to me, we were told nothing is ready yet and to come back at 1300. So we drove back to the main post, filled up the tank, and then waited around a while before heading back where I was dropped off.

I waited around for about 15 minutes before some others and the main guy came in. The took down our names (there is only 5 of us) and also asked who had admin privileges, only two people raised their hands. I guess everyone that was supposed to come, was supposed to have admin privileges already. We were given a small brief and then told to check in at another place in order to get our beds and temporary badges.

We headed over to another building, but they were not ready for us yet either. We had to just write our names down on paper, then we ran into the NCOIC that is in charge of the help desk and he told us to come into his barracks and get settled in. There are a number of beds, but only 5 of us here, so it seems a little empty. Surprisingly there are only a couple power outlets, so we are gathered around them and I quickly put my power-strip to use so me and the guy next to me can both use this one outlet.

We were then shown where the shoppette, laundry (coin operated) and bathrooms are located. After that I hung out on my bed for a while, just reading my book. A few of the others headed out with the NCOIC to the main post. Besides checking in today, we don't have anything planned. I napped for a bit, read a book (Steve Jobs)  on my iPad and watched a movie. Tonight's special was "Blade" starring Wesley Snipes. I hadn't seen it in forever and with all the current vampire craze that's going on, I wanted to watch an old school vampire movie (on my laptop).