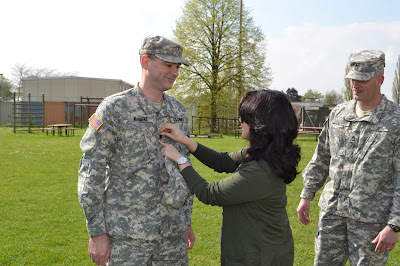 My wife "pinning" on my new specialist rank
during the small promotion ceremony.

This morning's PT was a run off post in civilian clothes. We ran about 4 miles into downtown Heidelberg across the new bridge and then back to post. Even though I have never cared for running in my life, I do prefer running off post with some different scenery than just running around in a circle on post.

We then came to work in civilian sports attire at 0900. Today was a sports activity day for our company and about 1100 we headed to Patton Barracks where we had a barbecue, then ended up playing basketball. I have to say that after running, a ruck march, and another run today that my legs were shot. I played in a couple of games with our Heidelberg unit vs Mannheim and then against Landstuhl. Surprisingly…or maybe not so, we lost both games..even though they were close. My legs were pretty much numb after that, so I opted out of the football afterwards.

The whole event was nice and laid back which was perfect. Everyone enjoyed themselves and had a good time. I then had to change into my uniform at 1500. They picked today to do my actual pin-on ceremony. So my wife was able to leave work early and head over. Everyone got in formation and SPC Matrix read my orders. My wife then took off my PFC rank and put on my SPC rank. Then she took off my hat with the PFC rank and placed my other hat with the SPC rank on my head. I then had to give a short speech that I wasn't prepared for, so I spattered off something about thanking everyone for being there (like they had a choice), and especially thanking my co-workers and my boss for their support.

After that there were a number of people that came up and punched me in the chest. I wasn't prepared for the first one, but after that I was ready for it. After taking all the punches everyone was free to go for the weekend.

My wife and I headed out to Mannheim to celebrate. She wanted to stop by a store and do a little window shopping then we headed to a restaurant. We used TripAdvisor to search for and find a place to eat. We decided to eat at a German restaurant and chose one called Andechser Mannheim. It had pretty good reviews at average prices…remember I'm still a junior enlisted. I love technology! We were able to find a place, read reviews, then plug the address in our GPS and head out. The food was good and I had a couple of German beers to celebrate my promotion, then let my wife drive back home just to play it safe…after we both had some ice cream for dessert.

A good day and a perfect evening with my wife. I am now officially Specialist McGuire.