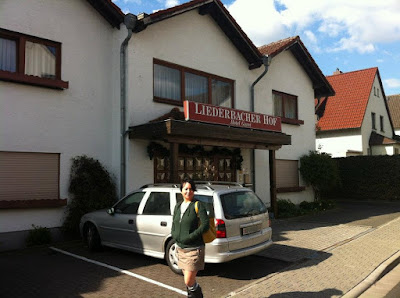 My wife posing in front of the Liederbacher Hof. A small hotel (bed & breakfast)
in the small town of Liederbach near Frankfurt

Friday: Today was pretty uneventful. It was nice not getting up early, I just woke up with my wife and gave her a ride to work. I had the day off, but unfortunately she doesn't get a four day weekend this weekend. I spent the day putting together our guest bed and doing housework such as laundry and dishes. Not very exciting stuff. I was still a little sore and my head was still somewhat fragile. It's crazy that my miracle drug (Excedrin) has been off the shelves for a while now because of a voluntary recall. There is no sign of it coming back and I've blown through my supply. My mom had a big bottle and shipped me more, but that supply is about gone as well. I can't believe the company hasn't been able to get their act together and replenish the supply. Excedrin seems to be one of the only pain relievers that can get rid of my headaches.

Saturday: We left to a small town near Frankfurt called Liederbach. I stayed in this town for the summer about 21 years ago. I had a friend I met through an exchange program a couple years earlier that I stayed with. My friend Ingo came and stayed with me and my parents a year before. Now after 21 years I planned to visit him once again. Ingo had a very unique laugh, one that would make me start laughing every time I heard it. He also was a drunk even by German standards…back when he was a teenager. So I figured we would be doing some drinking while we where visiting.

Ingo now is the owner/operator of the Liederbacher Hof, a small hotel located near his home. He took over the business from his parents and gave us a deal to stay there one night. I would say it's more like a bed and breakfast than a hotel. Ingo does everything from running the front desk to cooking breakfast. If you're interested in staying in a unique small quiet hotel with a nice host within minutes of Frankfurt I would recommend his place.

The biggest shock was that Ingo doesn't drink anymore..in fact he hasn't drank in over 10 years! I guess he lost his license twice and after the second time, he decided to give up beer. It was a huge surprise, but I'm glad he has made the choice to better his life. We visited for a while, then my wife and I headed over to the Main Taunes Zentrum, which is a shopping mall nearby. We passed the time until my friend was able to go out for dinner. We had a great dinner at a small Italian restaurant about a block away. The food was great and catching up with my old friend was a lot of fun. It's still amazing to me that it's been over 21 years! The city looked familiar, but to be honest I couldn't remember hardly anything there. Either the decades that have past, or the fact that I drank a lot when I was there before, may have contributed to my fuzzy memory…or I'm just getting old.

Monday: Woke up with my wife this morning and saw her off to work. The day consisted of laundry and studying for my Apple re-certification. Not too exciting, but it was a nice relaxing day before I have to return to work tomorrow.