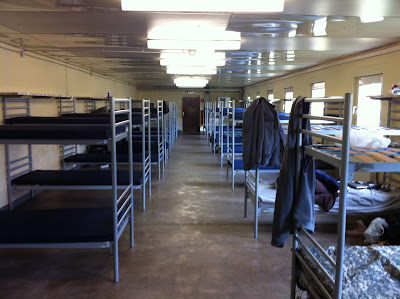 A photo of our barracks bay...it's pretty bare now with only 5 of us in there.

This morning I woke up on my own once again. I had my alarm set for 0730, but woke up at 0700. One thing I can say is good about this FTX, is that we don't have to get up at the butt crack of dawn to start the day which I very much appreciate. Our NCOIC took me to Burger King and bought everyone breakfast, which I helped him bring back. For some crazy reason they sell Whoppers for breakfast now, and that is what everyone got except for me. When I have breakfast I want breakfast food (Pizza is the only acceptable alternative…and it can even be cold when eating it for breakfast).

We started the day again in the warehouse and the whole first half of the day was spent doing "beautification" in each of the rooms. This was basically taping all the network cables under the long tables so they would be out of sight and not presenting a tripping hazard. We went to lunch at the commissary, which I have to say was awesome. They make a nice fresh sandwich and the total with a very large drink and chips was under $5.

Once back at the warehouse we started adding computers to the domain. Once added we did a couple steps to finish up and then the machine was ready to go. This all seems like an easy process, but somehow the leaders ended up changing some things up and getting everyone confused. We ended up working until 1800 and then finally were able to leave. This I don't think would normally be a big issue, but yesterday our NCOIC had told us we would probably be out of there at 1430 or 1500. So by 1800 everyone was grumbling and upset. Before I left I heard one of the leaders say we need to upgrade all the systems to Windows 7. If that is the case, I think they should have used a Windows 7 image when we pushed it out to all the machines. I guess we'll see what happens tomorrow, but I have a bad feeling that we are going to do a bunch more redundant work.

We headed back to the barracks and everyone left to the bowling alley to eat and hang out. I just wanted to relax, so I stayed back. If the place had free Internet I would probably go, but I don't think it does. This place really sucks for free WiFi. There is a couple places where you can purchase a temporary internet connection similar to ones found at AIT, but that is just a rip-off.

I read my book and then watched the last movie in the Blade series "Blade Trinity". I wasn't expecting much of anything from the movie, but it was surprisingly pretty good. It had a more modern feel and even a little "Matrix" flare to it. Toss in a little bit of cheese and kung-fu and it was a fun movie to watch. It even had Dracula in it of all vampires!