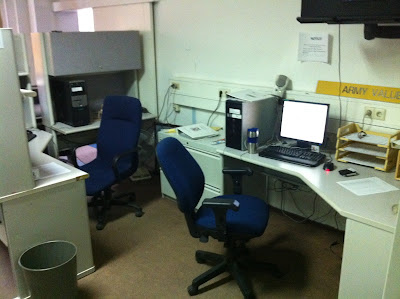 The work area we perform staff duty in. A chair and computer for both
the NCO and the runner on shift.

Saturday: Today I have staff duty once again, so I woke up with my wife and we had breakfast together before I headed off to the battalion S3 shop where the staff duty desks are located. The shift starts at 0900 and I arrived a little early at 0845. I brought with me my normal staff duty supplies…snacks, drinks, laptop (with hard drive full of movies), and iPad. I spent the first portion of the morning checking my work email and checking my personal email. The NCO with me was the sergeant on our maintenance side. He let me go for an hour and a half lunch, so I headed home and had it with my wife.

Once back at staff duty I did a little more surfing the net and then watched Black Swan. I had heard it won some Oscars and thought I'd check it out without knowing anything else about the movie. I was a little surprised when I started watching it and found out it was all about ballet. The movie itself turned out to be pretty decent because it is a psychotic thriller. The main character Natalie Portmand starts losing her mind which leads to some pretty interesting scenes.

I was later given a 2 hour break for dinner, which I went home again and spent with my wife. Once back at staff duty I read a book on my iPad, surfed the web, and watched a documentary on Air Jordan. What an amazing basketball player! Later on after the maintenance NCO came back I was able to copy a bunch of movies from him. Trying out a new one turned out to be a total flop. I started watching Bloodrayne. To tell you the truth I had never heard of it, but I thought the name sounded good when I was copying the sergeant's movies. The acting was terrible and the fight scenes were so fake I laughed at some points. I had to stop watching it and delete it immediately from my laptop.

The maintenance NCO told me that I could go lay down on the couch if I wanted and get a little sleep, so I took him up on the offer. The couch is not comfortable by any means, but much better than sitting in a chair. I laid down about midnight and would get anywhere from a half hour to an hour of sleep before waking up and having to reposition myself on the tiny couch. I finally got up at 0700 to finish the last couple hours of my shift. Hopefully I can stay awake when I get home, the final four is going to start right when I get off this shift!

Sunday: I arrived home and was able to stay awake to watch both NCAA final four games. I did take a nap in-between the games and during the halts. The rest of the day was not too exciting…just cleaning up a bit around the house and watching TV shows and such with my wife. I really hate Saturday staff duty shifts because they kind of screw up the entire weekend!