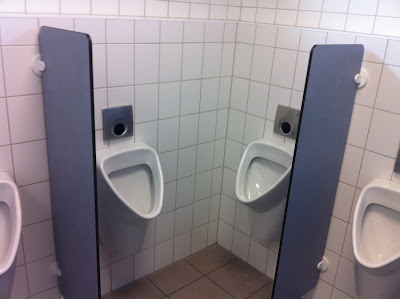 The Men's bathroom in "The Warehouse" (Bad Urinal Design)

This morning started off similar to yesterday, get up…get ready…take TMP for breakfast…go to work. It's a Saturday and at our morning meeting we were told that we would only have to work until lunch. I am not going to hold my breath on that promise. The entire day was retarded. There was no direction, our NCOIC was getting pissed off and all the soldiers were getting pissed off. The problem is that the leaders need to send a clear message to soldiers, tell them exactly what they want done and let them finish the task. This wasn't done today and it turned out to be very frustrating for everyone involved. We were told to go re-check every room to make sure everything was done. So even though there was a sheet on each screen with someone's initials by each task that needed to be completed, we had to check again.

It turned out that everyone just kind of spread out and ended up doing much of nothing. The guys stationed here permanently have an interesting way to find each other. We are working in a warehouse and all the rooms are just walls without a ceiling, you can hear one of the guys yell "Marco"…then a few seconds later another will yell "Polo". This is how they find each other throughout the day, so we are constantly hearing "Marco…..Polo" all day long…LOL.

Once I finished a room I just sat on a computer and checked my email and Facebook. I started to read the news as well. Nobody was doing anything, and I'm not too sure why we were even there. The few problems that remained were cleared up. These problems shouldn't have even been problems at all. It turns out that a number of the ports were not active when we set everything up, so when a computer was plugged in…there would be no connectivity. This is something that we could not fix, the "warehouse" had to fix it. The "warehouse" is a number of civilian workers that maintain the computers and networks that are used in the warehouse. Why all the ports don't work before an exercise is a little strange to me. Alas…all the needed ports and final issues were fixed…and we waited…and waited.

The help desk printer did not have drivers for the computers to use, so we had to wait some more until that was resolved. We waited and waited. 1130 came and went…people started grumbling a little. We were told to go check all the rooms again because (and I'll simplify the process a bit) the NCOIC did not see what he thought should be running at the end state, but it turns out that once the computer is restarted, this does not need to be running. He had freaked out and was yelling at the junior NCOs about this. I then had to prove that once the process starts it's good and will not show up after a restart. We waited some more…and longer.

By this time everyone was just pissed off. We had one guy in our group that just stopped talking all together. Another wouldn't stop talking about how pissed he was. Everyone was hungry and it was 1400…well past lunch time. We were finally let go at 1530 for the day. I guess we were able to leave after lunch, it's just that lunch didn't happen until 1530! I was a little pissed too, not for the fact that we had to work, but I think we should have been let go and then come back.

We immediately left before any change could be announced. We grabbed a TMP and headed off to the food court. I had an entire foot long sandwich at Subway because I knew it was going to be my lunch and dinner. We then headed to the USO so one of our guys could make a phone call. I was pleased to find that they had free WiFi and made use of it with my iPhone. I then hung out with the other guys with the laptops that were setup for users, when all of a sudden they all start laughing and tell me to look behind me. As I turn around I have to take a moment to realize what I'm seeing. Here is a young 9 year old Asian girl with the laptop turned so nobody can see it except our table because we are the only ones behind her. On her screen is cartoon pornography. I couldn't believe what I was seeing. Here is a very young Asian girl who I would just assume is looking up spelling bee words, or perhaps something for her next science project, but no I see naked cartoon characters. The only one I made out was the little mermaid and Scooby Doo, but I'm sure if I were into cartoons I could've named them all. So we all got up and left unable to control our laughing. I'm not sure what the world is coming to after seeing this.

I spent the rest of the night talking to my wife for a bit and then watching Apocalypse Now. I'd heard the name before, but never really knew what the movie was about. I copied it from our maintenance sergeant during our last staff duty, but never had a chance to watch it yet. It turns out it's a pretty interesting Vietnam war movie about a guy with some demons of his own. He has to go on a mission and "terminate" a colonel who has gone rogue. The film is an interesting look at some of the right and wrong things we do as humans and how a lot of what is right gets thrown out the window during war. I thought it was a good movie, but perhaps not good enough to keep in my movie collection. It's definitely a movie worth watching, but I probably wouldn't watch it again.