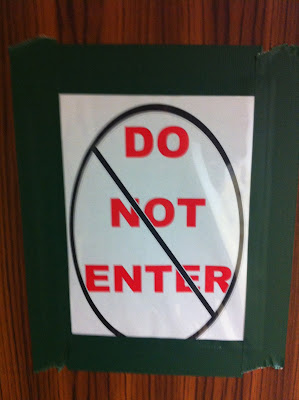 If do not enter is crossed out...does that mean enter?

This morning everything went as usual…some cereal at the DFAC and a banana, then off to work at 0900. There was not a lot to do…in fact most of the day we all just sat around the help desk area waiting for a task to do. I've vented a little about our NCOIC before and today will be no exception. He is the kind of guy who must feel a little insecure about himself. He always conveys that he's a smart guy, but then proves otherwise. He is the guy who will put you down in order to make himself feel better. Since he is an E-7 I wonder how he even got there, the guy is a moron and he doesn't try and train or help those below him. Unfortunately he'll probably get an award and a bunch of "atta boys" for doing such a great job with this FTX. The FTX will get done and we will take care of all the issues, but not because of anything he has or has not done.

Shortly before lunch I was tasked again with a VTC issue. They had added another VTC and I needed to get an address to it and update the spreadsheet I had made with all the room numbers and addresses on this. I had been using this same spreadsheet the entire time and emailing it back and forth to a civilian I was working with. Once finished the civilian asked me to email him the final version and also print out one that we can keep in the help desk area. No problem…I printed it off and didn't think much of it. I was about to grab it from the printer when the NCOIC took it and said "What the hell is this? It looks like something a two year old can do. Do it again and make it pretty". I was in a little shock for a minute, then angry, then pissed off. What the fuck is up with this guy? It's a simple spreadsheet that shows each room number and the address of the machine in it. I wasn't told anything except print off the spreadsheet I had. The NCOIC then came over to my machine and I just moved out of the way. He looked around for about 5 minutes trying to figure out how to do a special copy and paste from Excel to PowerPoint. Once he had that done he made the spreadsheet info a little bigger and told me to put a header on it and print it out. I did, then left for a walk to the shoppette just to get away from him for a bit. As I was leaving I heard him ask another guy why it was taking him two hours to add a printer to that machine, but he said it in a way to make the guy feel like an idiot (in truth of course it had only been a few minutes and he had to download the special drivers from the internet for this particular printer)…the NCOIC is just an ass.

By the time I came back one of the civilians had bought pizza for all the help desk workers, so I dug in and had a few pieces. We then waited around the help desk as we had earlier in the day. I was then told that he wanted another computer at the help desk for us to use and told me to go get it from "warehouse". I had to ask the permanent party folks how exactly to get to these "warehouse" folks, but when they asked why I was told they will not give me any computers because they're not on the room build. I relayed this to our NCOIC and he told me to go anyway. The warehouse folks are located down the street in the last building on the right. It was a nice day out so I took a nice…very slow…walk outside and away from everyone. I arrived and asked the warehouse folks for a computer, they said no and that this kind of request has to go through operations. No problem I said, then slowly walked back to work. The NCOIC was busy in some other conversation, so I figured I'd tell him later on and sat down with everyone else around the help desk.

At one point later on in the day the NCOIC and another sergeant asked me to follow them. The NCOIC then asked if what he said to me earlier offended me. I said yes, indeed it did you asshole…well not in those terms, I just said yes. He then made an official apology in front of another witness. It was all a little strange, my guess is that someone a little higher than him either overheard him or someone else told someone higher up and he was forced to apologize. He can apologize all he wants, but if he doesn't change his behavior it doesn't really matter. He's an ass, everyone hates working for him. The permanent party folks joke about how bad he is, the air force folks can't believe they are stuck with him, and of course all the rest of us army guys hate him.

We ended up sitting around for a few hours doing absolutely nothing. 1700 came and went and we still just sat there waiting to get released. Finally at 1730 we were able to leave. We found out our schedules for tomorrow and the next week. We will not get any weekend off unfortunately. They made two groups…the permanent party group and the TDY group. My group, the TDY group with everyone that came here from somewhere else, has the day shift. We will be working 0600 to 1200 Saturday through Tuesday, then on Wednesday on we will be working 0600 to 1800.

I headed back to the barracks and just relaxed for a while reading. I talked to my wife a bit and ate dinner which consisted of some wafers and some almonds, a light meal since I had pizza at lunch time. After yesterday I decided to keep showering at night instead of in the mornings. There are a lot less people in there at night. I put two big bandages on my feet in the morning and was able to keep them on in the shower. I want my feet to be at least partially healed before they come off. I watched Missing in Action with Chuck Norris…LOL. I forgot just how corny and cheesy this movie really was. The acting is laughable and so is the fighting scenes…pretty funny to watch, but definitely not something I'm going to keep in my movie collection.