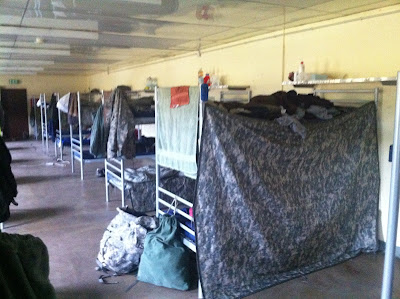 This morning I did my usual at breakfast, cereal and fruit. We then headed to the warehouse and started work at 0900. Me and a co-worker were tasked with getting the VTC machines ready to go. They wisely decided to use static IP addresses for these machines (This means the address is a permanent address vs one that may change over time). We had to put in the address and then make a test call to verify everything works. We took our time because we knew there was not a whole lot to do today…we finished almost everything yesterday.

We did find a couple problems and had to troubleshoot the issues. Finally we were down to two machines that didn't have speakers, so we had to request them from the warehouse. After this we settled in and started surfing the net. There was absolutely nothing to do, but for some reason the NCOIC wanted people doing something…so he would have people go and recheck rooms we've already checked at least twice already. Our NCOIC came in the room my co-worker and I were in and said "What are you guys doing? Come follow me I got something for you to do" We proceeded to follow him and he had us move two folding chairs about 3 feet. I kid you not, that is what he had us do. At one point in the day while I was working on the VTCs and he saw me walking across to another room, he called for me to come over to his desk. He then told me to put some paper that was on top of a cabinet in a box. It started to become a game where nobody wanted to be anywhere the NCOIC could see them. I ended up hanging out with the air force guys because they have their own NCO and he doesn't play the stupid games.

The air force guys also have two TMPs and offered to take the junior soldiers to the food court and PX for lunch. Anything to get away from the NCOIC is fine with me. After lunch we spent the rest of the day doing nothing…everything is setup and we are just waiting until next week when the exercise starts.

After work we headed to the gym to play some basketball. We were supposed to play against the air force, but they ended up not showing up for about an hour later. I tightened my running shoes and decided to play with everyone. Two of my co-workers were there and also a captain that is pretty cool and staying with us in the barracks. I probably shouldn't have played because I didn't have my basketball shoes, but my competitive nature got the best of me…that and my co-worker really wanted me to play. I ended up tearing up my feet just like I did in Korea when I played in running shoes. The skin on my feet just tore off and now I have big flabs of skin just hanging off my feet and I can barely walk. I also played like total crap. I couldn't hit a shot to save my life. Normally I consider myself one of the best shooters out there no matter who I'm playing with, but for some reason I couldn't hit anything today. The only good thing is that I got a bit of a workout, but it came at a big price.

I took a shower back at the barracks and listened to the bombs and artillery going off consistently. It's strange being so close to and actually feeling the artillery at times even in our barracks. I heard today that the battalion that is in the set of barracks right up the road from us just lost two soldiers in an accident on the way here while traveling on the autobahn. Pretty crazy how one minute you can be on your way to do some training and out of the blue you get hit by a semi and it's over. I really changed my mindset after divorcing my first wife, and now I try to live and experience every day to its fullest. It's reminders like this that help you remember just how short life can be and you really don't want to waste it. It's one of the reasons I wanted to do this whole army thing…I wanted to do it before I got too old and I wanted something different, I wanted to see the world, and I wanted a little adventure.