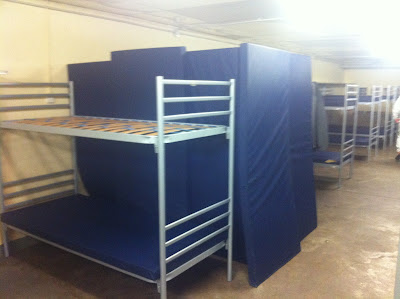 The NCOIC tried to block the sound from one of the guys snoring
by staking up mattresses around his bunk...it didn't really work,
but it was funny when the dude woke up and wondered
why he was surrounded...LOL

This morning started off bad and the rest of the day went downhill from there. I woke up with a raging headache, which just sucks. The mattresses on these beds just suck and I must have slept wrong. The mattresses have about the same feel as a wrestling mat…they are just not that comfortable. I popped 3 Excedrin and then went to get ready for the day. As I was almost finished getting ready our NCOIC asked if everyone wanted Whoppers for breakfast as he was heading out. We all waited for him to return, but he never did! We all headed to the warehouse and waited for our morning meeting to start at 0900. Our NCOIC walks in and doesn't have any breakfast for us. Now I don't expect him to purchase breakfast every morning for us, but if you say something like that and walk out the door…everyone is expecting food. If you're not going to buy it for us, then let us give money or go with so we can get something.

In the morning meeting we were told we would probably only work until lunch today, then each of us were given tasks to accomplish and were sent off. I started working on my task (finding out which network ports were still not up and running), then at 1000 when the shoppette opened, I headed over there and bought a couple snacks (NutriGrain bars) for breakfast. Once back I continued my work, then suddenly the NCOIC comes in and tells me and my co-worker that we need to stop doing that and do this other task. This went on the same way throughout the day which was driving everyone completely nuts. Our NCOIC is the project manager for this setup and he is the absolute worst project manager that I've ever worked with. I've done a number of big projects working in the IT field and this is the absolute worst leadership ever! We all felt like we just kept starting on something, then moved to something else, then moved again and again before finishing any task. We also felt like we kept doing the same thing over and over. The fear that we would have to re-image all the machines to Windows 7 came true…all the time that we took imaging computers before to Vista was all for nothing. I think the worst thing about this NCOIC is that he thinks he knows everything. He is always bragging about how smart he is, though he proves the opposite every chance he gets.

We got a TMP for lunch and went to the commissary once again. This was a pretty funny event in a stressful day. The guy driving hadn't used a stick shift in five years he said and he kept killing and stalling the engine, unable to work the clutch very well. He killed the TMP after showing the ID to the guard and it took us a few minutes to get moving out of there, I was laughing pretty hard.

Back at work it was the same ol' same ol', running around like a bunch of chickens with our heads cut off. Instead of getting off at lunch time, we got off at 1930. I headed back to the barracks and quickly changed into my comfy clothes, then ate the other half of my sandwich I saved from lunch, by this time everyone was getting pretty hungry. I then talked to my wife for a bit before reading my book and then starting a movie for the night.