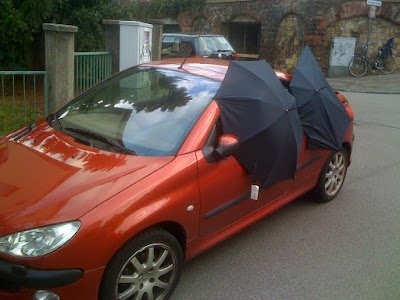 Came across this car on our ruck march this morning...LOL

This morning's PT was a ruck march off post. We headed out to switchback mountain, went up and then back down. We then headed over to "the stairs" and headed up and down all 500+ stairs. Once finished we grouped up and headed back to post. I don't care for ruck marches too much, in fact I think they're pretty stupid. I was thankful though that it didn't rain and also unlike last time, we were warned that it would go longer than normal PT. This let me plan accordingly and have my wife drop me off with plans for me to just stay at work to shower and eat breakfast.

I showered at the gym and then headed over to the food court to pick up some pastries for breakfast along with some coffee. Since it's Thursday we had our usual training…I have to say that this training was a bit unusual in the fact that it was actually 25B training! We were given a class on security+ that was given by my sponsor from when I first arrived here. Even though I'm already certified, I was happy that we finally got some training that actually pertains to the 25B job. The training was good and went from 0900 until a little after noon.

I had lunch at Subway in the food court, then headed back to the office with some reading material ready to go. I spent time reading Army Times, then just kind of hung out for a while until I had a chance to jump on a computer for a minute. We all had to turn in our weekend checklist today. I don't know what I actually have planned this weekend yet, so I just put "spending time with my lovely wife in the greater Heidelberg area". SPC Whirlwind liked that so much he asked me to print out another one with his name on it as well.

We then did some cleaning up of the office before heading out for the day.