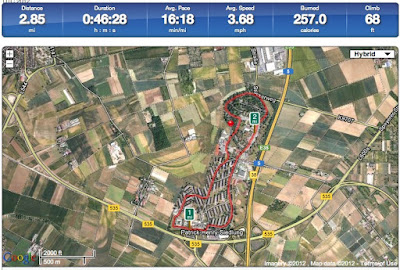 PT this morning was a ruck march around PHV. We ended up going the extended version which ends up going through all the fancy pants officer's housing area. Their houses have garages and are nice and big. It made the ruck march almost 3 miles. The sergeant leading PT said he wanted to have everyone finish it in 45 minutes. His goal is to have us do a six mile ruck march in one hour and 45 minutes. I have to say that I think ruck marches are the stupidest thing ever…especially in today's army. Troops don't ruck around for miles…especially computer geeks.

Since I was scheduled to work in the mailroom, I thought I would get out of the sergeant's time training today just like last week…but right before the end of PT I was told I needed to attend the training and then go to the mailroom afterward. The training started at 0900 and was in a nice conference room that we've never used before. The room was nice and the chairs were comfy, which turned out to be a problem for a few soldiers because they were told to stand up after nodding off. I have come to loathe most army training that we get. It is a complete waste of time and they give us the same training over and over again like they are trying to beat the information into us. Such was the case with our first training brief this morning. It was given by community bank (operated by Bank of America) and was about finances. Every soldier has had this class in AIT and during in-processing here in Germany. Why do we need it again? Why do I have to hear propaganda from a for-profit bank? Personal feelings aside (I don't use banks, they are "for-profit" greedy corporations that contributed to the collapse of our economy and caused the great recession…I use only credit unions…these are not-for-profit institutions) I think if they offer this class, have an independent financial adviser give it and have them give some better information than the interest rates offered by their bank.

The second class was MRT (Master Resilience Training). This class was all about resiliency. We need to be more like tennis balls and not eggs…we need to bounce back up when we get down…we need to be positive…we need to be optimistic…we need to be enthusiastic. I guess they started this training after so many people were having issues during and after deployments. Now it is being taught to everyone in the army, not just soldiers that are deploying. The concept is not a bad one, and if I came in with an open mind I would get more out of it. I just really wasn't in the right frame of mind after the first training brief.

After the training I went to lunch, then headed to the mailroom. I was shocked to see all of the civilian workers actually putting mail in people's boxes. It was crazy…every single worker was busy getting all the mail delivered. This is something I thought would be normal, but it's the first day I've seen it. I was in shock. I worked customer service at the front counter. It was a pretty slow day with customers coming in at a very slow pace. I did learn how to close a person's box and open a new one for people that are in-processing and out-processing. I'm going to know how to do everything, then I'll leave and go back to my other job…lol.

One nice thing about working in the mailroom is that right at 1700 I leave. I don't have to wait for the boss to come and give any announcements and then dismiss us…I just walk out the front door on time…every day. I went home with my wife and we hung out watching TV shows. Now it's time to go lay in my comfortable bed once again.