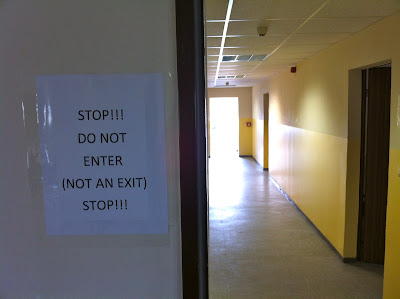 Ummmmm.....I can see the exit right there!

As expected the new barracks was quite a bit different than our old barracks. Last night I realized another advantage of bringing a couple blankets to drape on either side of your bunk. The couple that did had their privacy as I mentioned, but they also had a nice dark area to sleep in. It didn't matter how late the lights stayed on, or how early the sun came up…they stayed relatively dark. I'll definitely have to consider that next time if possible. The problem is that you have to secure a bottom bunk in order to make it work. I used my PT cap as usual and put in my ear plugs. The PT cap pulled down over my eyes does a decent job of keeping the light out. At 0500 in the morning people's alarms started going off. Not all at once, but about every 15 minutes or so I would hear one even with my ear plugs in. This was kind of a bummer because I wasn't planning on getting up until 0700 (a half hour earlier than usual because we had to be in a half hour early at 0900).

I finally just got up about 0645 and started getting ready for the day. Today was the day the SIPR (secret) network was turned on. This in turn causes a lot more security to be enforced such as no personal electronic devices are allowed inside the warehouse and there are guards posted at the entrance to check for ID badges and inform folks to leave said electronic devices behind. Me and a co-worker found out when we arrived that we would actually be pulling this guard duty today…or at least this morning. The people that are coming to do this for the exercise were arriving today, but they were not sure when…because of this we were voluntold.

We were given the security brief and then started our new job. It was actually a really easy job and turned out to be just sitting in a room waiting for the occasional person to come show us their badge so we could buzz them in through the door. As each person would go by, we would remind them not to bring in any personal electronic devices. Most of the time we just sat there and surfed the internet on the computer in the room. We ended up doing this until the real guys pulling guard duty arrived. They came in perfect time for lunch, so we ended up leaving in a TMP to the bowling alley for lunch. We heard their restaurant was pretty good and wanted something different.

Once back at work we joined the rest of our crew getting the SIPR computers up and running. The process was very similar to the unclassified network (NIPR), but this time the NCOIC picked 4 rooms and had everyone concentrate on these four rooms until each step was finished. This seemed to work out a little better than the crazy "chicken with their head cut off" method used last week. We stayed until about 1730 getting everything finished and then had an end of the day meeting to update the status of everything.

Tonight the exercise DFAC finally opened. There are a couple of advantages of this…I don't have to buy food anymore, it's located literally 40 meters away from our barracks. There of course are some drawbacks as well…I will not be getting paid the full per diem rate and…well…it's DFAC food. We had dinner there and I had some sort of chicken stir fry concoction over rice which was edible, but my buddy tried the pork dish and couldn't eat it. He had me try and I couldn't blame him. I told him to go up and get a serving of what I had and he did. The really nice thing is that the DFAC will be open for breakfast, so there will not be anymore scrambling in the morning trying to figure out how to eat. (This morning I just had to wait until the shoppette opened at 1000 and make a quick run over there to buy a NutriGrain bar for breakfast).