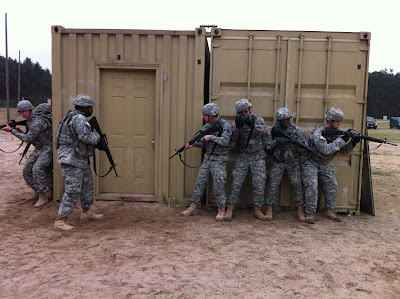 This morning we did not have PT. Instead we had to form up early (0630) at the armory to get our weapons issued to us. We have training scheduled for our Thursday sergeant's time training and today is a special one. We are heading out to Mannheim and meeting up with some other platoons from our company that are located in Mannheim, and there are even some from Landstuhl making the trip down.

Our platoons here in Heidelberg took 3 TMP vans to Mannheim which is about a half hour to 45 minutes away. Once we arrived we headed to the DFAC right away and everyone had breakfast before heading out. The DFAC food was typical DFAC food, we got enough to fill us..but the quality left something to be desired.

We then went to the field and broke up into three even groups to start our training. I have to say this is the kind of stuff I really don't like about the army. The motto is that "Everyone is a soldier first", but I sometimes think they use this as a blanket excuse to just do infantry training. We have to have some sort of training every Thursday and because there is already so much infantry training all laid out and ready to go, they just go with it. It's useless training for me and I really hate it. I really wish they would do some geeky computer training! You may think that it's funny that I'm in the army and don't like to run around in the bushes playing army man. I think of myself more like a guy with talent and experience in a professional field. I left my profession to serve my country for one tour of duty. In doing this I made sure to get my particular field selected for my job and planned on contributing during my service. My specialty is computers…Information Technology. I'm experienced, I'm certified, I graduated at the top of my AIT class, yet I still have yet to do my job in a full time capacity…instead I get a glimpse of my profession every now and then, but that is it. Think of a talented surgeon that wants to give back to his country and joins the army as an army surgeon, but instead of working in a hospital they have him kicking in doors and running around the woods. They have him doing this not as a combat medic, but just as a soldier learning infantry. This is how I feel every time I go to the field…in fact every time I attend any army training each Thursday. Also we just found out today that there are no appointments allowed on Thursdays anymore…just in case someone wanted to use one to get out of this "awesome" training we have. This was put out by our battalion commander.

The training is given by our NCOs and I'm not upset at them…at all. They are most times not even told what they will be teaching until the last second…sometimes the day before. Another crappy thing the army does which hurts not only the teacher, but also the students. In our training sessions today we had the NCOs reading line by line from sheets of paper printed from the internet telling us how to run around the woods and play army man…well enough ranting here is how the day went:

Our first group we had to form up in a platoon wedge formation and start walking through the woods. We were told the entire days training should end at 1100…so we got started right away. This basically involves 2 teams each with a point man and the rest of the team at a roughly 45 degree angle walking…kind of a similar formation you would see a flock of birds flying…except spread out a little farther apart. Our training was on how to react to fire. So if we happened to be patrolling the woods and were fired upon, what should we do? We walked through the correct procedure a few times. They made me squad leader at one point, which is another thing I really hate. I have no desire to ever lead a group of troops through the woods or any other kind of infantry movements. It's not "good training" for me, because it's something that will NEVER happen.

After that we went to the next station which was how to hold your weapon in close quarters and also when the enemy is within 25 to 50 meters. This class was pretty simple and not very time consuming. After a few demonstrations we all practiced and then would practice turning left or right with the weapon ready.

Next was the mount training. This tactic involves lining up outside a door and then kicking in the door and clearing a room. We then did more advance scenarios such as the entire house with two teams.

Once finished we found out we then had to each do a larger scenario that took everything we learned and put it all together. My group volunteered to go first while another group would watch and the last group would be the enemy (with their ACU tops on inside-out so we could tell). Someone had the great idea to make me and another PFC the squad leaders of the group. WTF? We have a number of NCOs in our group who sit around in an office environment and only get to lead in a supervisory role. These should be the guys jumping at the chance to now lead in a tactical exercise, this should be their chance to shine as leaders and practice something they do not get to use. Nope me and another PFC got the job. Needless to say we all died many times before even getting to the village to clear the houses. Luckily we were able to get resurrected each time, so we could clear the houses. We cleared the first house fine, but everyone died in the second house.

Now I was about to rest a bit as the next group went, but they needed two extra people and wouldn't you know it…I was one of the ones chosen. FML! We went through the scenario again and I was finally able to rest after we finished while the last group went. The training took way longer than anyone thought it would have…we left at almost 1500. Without lunch there were plenty of people getting cranky. My neck, shoulders and lower back were extremely sore from wearing my body armor all day long. I can handle it for short periods of time, but it really messed me up today.

We headed back to the armory to turn in our weapons. We then had to turn back in one of the TMP vans. I drove the van there and SPC Mac brought me back to the office. By this time it was almost 1700. Everyone gathered in the office and we received our safety brief from our NCOIC. After that we were released for the 4 day weekend! I went home took a hot shower and had my wife rub icy/hot on my shoulders, then proceeded to take pain medication…I only wish I had some prescription strength medication.