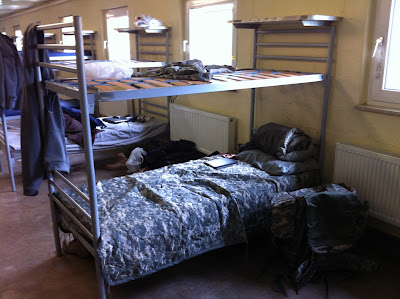 This morning I woke up about 0715. I woke up a few times before that and had my alarm set for 0730, but decided to get up since it was so close. I grabbed my shower/bathroom gear and headed to get ready for the day. The bathroom and showers are located about 50 meters away in a separate building. Once I was ready to go I read my book for a while until everyone was ready. There was no plan yet for breakfast and I was a little upset that there was no plans made already to take care of the soldiers here. At the last minute the NCOIC found out that we could take a TMP and we headed to the main post and ate breakfast at Burger King. We are supposed to get reimbursed for our meals and such because this is TDY, but I don't have much confidence in the whole army finance system. We shall see.

We arrived for our morning briefing and were introduced to the staff that works here full time. I was surprised to see a guy that graduated in the class before me at AIT. He was friends with my roommate in RBK. He said he went for a year in Kuwait and then came here. He did a bunch of 25B work while in Kuwait and since he's been here, he sets up for exercises and then breaks everything down. Pretty much what we are here to help out with…he does full time. He also said he's only got three weekends off this whole year which really sucks! Funny how different your job can be depending on your unit and your duty station.

We started the day off connecting a number of computers to network jacks in the wall. There were three different types of systems and we had to make sure to use the correct cable color for each system and jacks on the wall. For example the NIPR network computers (unclassified) all use green cables and connect to green jacks on the wall. Not really rocket science and I'm not complaining because this is probably the closest thing I've done with Information Technology since I've arrived in Germany. We connected all the computers in various rooms. The exercise that is taking place is actually happening around the world, but for our part here it is taking place in a big warehouse type of building. This huge building has been separated into many smaller rooms that are jammed with computers and desks. We systematically went to each room and connected everything.

For lunch we were given a ride to the food court back on the main post. Pizza Hut had no line, so I ate there for the second day in a row. Not sure I can keep doing this without gaining about 30 pounds while I'm here!

Back at the warehouse the next step was to image all the NIPR machines. This was done with an image on a laptop acting as a ghost server, then connecting that laptop to a switch that we brought into each room. We would then connect temporary cables from each of the NIPR machines in the room to the switch and restart them to connect to the ghost server. After that the image was pushed out and would update everything in about 20-25 minutes. Once this was done there was a brand new "fresh" install of the operating system along with all the required settings on each of the computers. We had two setups for this that we would alternate with each room, this way we could have two rooms getting imaged at the same time. We were able to finish pretty much everything we needed to today.

We left for the day at 1700 and went back to our barracks. The other guys headed to the gym and then got something to eat. I stayed back not feeling the urge to head to the gym when I was nursing a headache. I'm going to take some medication and try to get back to normal.

I was hanging out alone in the barracks and my NCOIC came back with Chinese food which he gave to me. I wasn't planned on eating much of a dinner and this turned out to be perfect! I then talked to my wife for about an hour before settling in and watching "Blade 2". I had never seen the sequel before and was surprised that it didn't actually suck, I thought it was a decent movie. I had to take a break in the middle of the movie, our NCOIC wanted to have a group huddle before the end of the night. He basically said we all did a good job and to keep it up. He said he's going to put us all in for an award (AAM: Army Achievement Medal) for the exercise, but cautioned everyone to make sure they keep busy. He then went around asking everyone what they had learned. I had to say that I didn't actually learn anything (because I've done all this before in civilian life), but it's better than ComSec work.