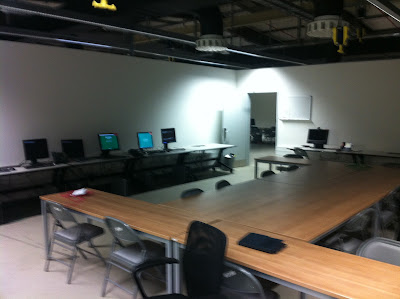 A typical room that we setup inside the warehouse with both unsecured and secured computers.

This morning after yesterday's ordeal with breakfast we all just got ready and then got the keys to the TMP and took ourselves to breakfast at Burger King. It worked perfectly and everyone was happy. (We should have been doing this all week).

The day started off with a meeting as usual. We were told that there would be a group of air force personnel coming to be part of the exercise and helping us with the I.T. portion. We were also told they will not be staying in the barracks like us, they instead will be staying at a hotel off post the entire time. This is the difference between the army and the air force. The air force treats their people so much better. You can go onto any air force base and the quality of living is so much better than the closest army base. I've seen this first hand on multiple occasions.

We were each given tasks for the day and sent off. My task was to check each room and image any stray computers that had not been imaged yet for various reasons. Whatever the reason was, it was supposed to be fixed and they should be ready to image. I was skeptical at first, but as I started making my way from room to room the image worked on each computer. To put the image on takes about 15 minutes, so while I was waiting I would get on a working computer and check my personal email and Facebook. It's strange when I go for a few days without having internet, I feel so isolated.

At lunch we headed to the food court in a TMP  and I decided to have Pizza Hut once again. I've had it 3 days this week! I could eat pizza everyday (I did when I was a young lad working at a pizza joint), but I know it can't be that good for me.

When we arrived back at the warehouse I continued working on imaging a computer here and there. By the time I finished I had also caught up on my email and Facebook for the most part. We were then gathered together for a meeting where our NCOIC complained about how everything is going. It's really due to his bad leadership, but everyone let him bitch and moan for a while. We then were told to pair up and get assigned to a room. We were not allowed to leave "even if it takes until midnight" until the room was good to go. One of the NCOs who is stationed here permanently then printed out a sheet to go with each computer that we would check off the status of everything that has to be done (Imaged, Joined to Domain, Named, Printer…etc). This should have been done a long time ago and would have resolved a number of problems earlier on. My room had an issue with the printer not working, but I found out it was because the pause button was stuck on, this caused it not to work at all…or even show that it can network connectivity lights. I resolved that and then we got all the computers connected to the printer and made sure they were all good to go. Once I told our NCOIC we were good, he told us we could go. I left immediately which ended up about 1645. I then headed to the barracks and read for a while.

Getting off work was short lived as the NCOIC wanted to have an end of the day meeting and forgot he said me and another guy could go. So I had to get dressed up in my uniform again and head back over to the warehouse. I wasn't surprised, it just seemed typical. We were informed we would have to work tomorrow (Saturday) to finish things up for the NIPR network. The funny thing is that the air force guys have tomorrow off and will come in on Sunday if needed. I say if needed because there is not a whole lot to be done. I think there are a few computers and loose ends to tie up. We were told we would only work until lunch…I laughed a little on the inside.

We then were released for the day. I headed back to the barracks and finished watching the movie "War Horse". I would say it's not my typical movie. It had the word "war" in it so I thought I would give it a try. The movie revolves around the life of a horse who happens to end up in the middle of world war 1 and gets passed through a number of people's hands. Each time someone comes across the horse, it makes an impact on their lives. It's basically a chick flick that I was tricked into watching because it had "war" in the title. There was some trench warfare scenes which were interesting, but not enough to make me like the movie. It did pass the time, but I would not recommend it to anyone but girls that like horses (isn't that all girls?)