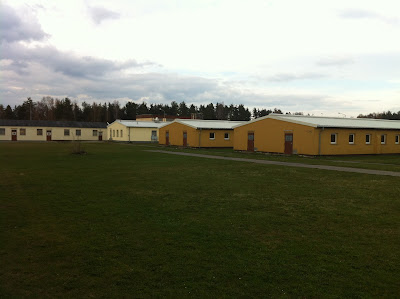 Just a general photo to show the barracks we live in.
The building on the end is the bathroom and showers

This morning we started at our usual time of 0900, the nice thing was I didn't have to worry about how or what I was going to eat for breakfast. The bad thing was that the DFAC food just really sucked. I tried some sort of omelet in a pita bread concoction. I only took a couple of bites before I had to stop. I thought about eating the bacon, but it was very limp and was just dripping with grease. Don't get me wrong, I'm a huge bacon fan...but I just couldn't bring myself to try this stuff. Luckily the DFAC also offers other items such as cereal and fruit, which I decided to have instead…I think I'll be sticking with that from now on.

The work day was somewhat productive, I started off getting all the VTC (Video TeleConferencing) machines tested and ready to go. These are basically a large screen with a camera on top used to make video calls over the Internet…similar to Skype, but this is their sole purpose and they have better quality from what I have seen. I then helped get more SIPR computers up and ready on the network. We have a lot more SIPR machines and it seemed like we had a lot more problems with them as well. We had to have "the warehouse" exchange more than a few machines because of hardware issues that we kept coming across. Each time this happened it would take extra time. The process of getting a machine working good takes a few reboots and some configuration settings, but the machines aren't the fastest. So if all goes well we get a machine up and on the network in about 10 minutes. It always seems there is something that needs to be fixed though, the network cable is bad, the video card is bad, the image is bad, the bios is locked…etc. Each of these items takes time to troubleshoot and then resolve, so it was slow going…but we did make a lot of progress. I think we should be able to finish up tomorrow, or at least get really close to being finished.

We were given MREs for lunch, which we grabbed from the DFAC and brought back to the barracks to eat. Because we are in a training area we can hear and feel the explosions of either tanks or artillery around us. It's pretty crazy because sometimes it seems as though there is a tank right outside the barracks firing. It's loud and you can feel the rumble as the windows shake.

Back at work we continued our progress and worked until about 1745. Once we were let go, my co-worker wanted me to come play basketball with him at the gym. We decided to skip the DFAC and go play, planning on eating afterwards. I didn't actually play any games, I just shot around. For one thing I'm old and out of shape and I also didn't have my basketball shoes. To be honest though I really don't care for playing with people I don't know and I don't mean to be racist here, but I especially don't care for playing with black folks when I don't know them. Their style of play is a lot different, and being the only white guy playing I don't think I would even get the ball passed to me at all. So I just shot around and my co-worker played in a few games. I'm really glad I didn't play, because I can feel my legs are sore from just shooting around…that is pitiful, I'm so out of shape!

It turns out we left the gym too late and all the places to eat on post were closed. We decided to go off post and grab a bite because we were starving at this point. We went to a little restaurant that we had a brochure for about 10 minutes away from post. The place was nice and quaint. I wish we would have stayed there to eat, I would have tried one of their family beers and watched the soccer game on the TV. I'm not a huge soccer fan, but there were about 6 locals in there all excited and watching the game.

We got back at almost 1000 and I quickly ate and then prepared for bed. Hopefully I'll get some good sleep tonight and be ready for the another day tomorrow.

Overheard Quote: "Man….I'd rather get my prostate examined than eat that shit!" (A guy in our barracks after coming back from eating at the DFAC)