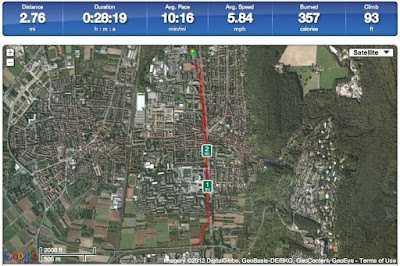 The morning PT run off post in 24 degree weather...thought my lungs were going to freeze

This morning's PT was a run off post. This means we dressed in civilian clothes which is nice, but it was so cold that I'm not sure what more I could have put on to keep me warm. Then if you put on too much you get too hot and sweaty during the run. My legs were still sore from the last two days of PT, so with that and the freezing temperature I ended up just jogging. It ended up being a pretty good workout though, I never stopped and had a good sweat going by the end.

SPC Whirlwind's wife drove us to work this morning, so she could keep their car and drive my wife to her driver's test later this afternoon. Once we arrived at work, we took the TMP and drove it to Patton Barracks. There was a customer out there that needed help loading their encryption key onto their device. I had never seen this done before, so I went along just to see. It was a waste of time for me though because I couldn't see anything that was going on. I got the basic idea…an encryption key is on the customer's portable device and that keep gets downloaded onto their equipment via a transfer cable. The problem is that I couldn't see the menu on the portable device and SPC Whirlwind was going so fast I didn't even bother to try and keep up. The only way I'll be able to learn anything in this office is by doing it a few times. This goes for all the paperwork as well as anything like this "house call", which is something I guess we hardly ever do.

When we got back it was time for destruction. There is a lot of encryption keys and paperwork that have expired and must be destroyed on the first of each month. All keys are accounted for and checked twice, then destroyed in a variety of ways. The most interesting one was using an actual sledge hammer!

I had lunch in the food court, which I need to stop doing. I've been going to pack a lunch, but keep forgetting. Having Subway for lunch each day is going to break my budget…I'm just a private! Once back from lunch I was told that I had to attend a training brief in the battalion conference room. The training was called MRT (Master Resilience Training) and is part of "Comprehensive Soldier Fitness". It deals with the soldier's mind and mental thinking. The idea is good, but the implantation of this particular training was poor. Everyone there was told they have to attend and the instructor couldn't get the computer to work at first so the first few lessons were paraphrased from his book instead of viewing slides. Everything was rushed through and we completed a couple days worth of training in a couple hours. I can't say that I particularly wanted to attend this training, but with everything being rushed through it seemed like just a waste of time.

Back at the office I headed straight to the bathroom to go pee. I had been holding it for the entire training session and had to go. Normally I don't report on my bathroom breaks, but this will come into play in a few minutes. I then was able to log onto a computer for a bit, but after trying to setup my email I found it is still not setup. I'm supposed to write a counseling statement for our commander even though I've met him for a total of 5 minutes. I guess that will not be getting done. I then hear our NCOIC tell everyone to head over to the day room at the barracks because we're doing 100% urinalysis. Oh great…I just went pee!!! I started chugging more water and then headed over to the barracks which are right across the street. After finishing a liter of water and refilling it again, the time came and I went. This is my first pee test since AIT where I may have come up showing too much chocolate milk…now it may be too much "herbs and cheese" bread from my sandwiches at Subway.

My boss had to stay until everyone was done with the pee test, so I caught a ride home with one of the maintenance guys. When I got home I found out my wife passed her driver's test, so when we finally get our car we will both be able to drive which will come in handy. My wife gave me a haircut and then we settled down and hung out watching shows.