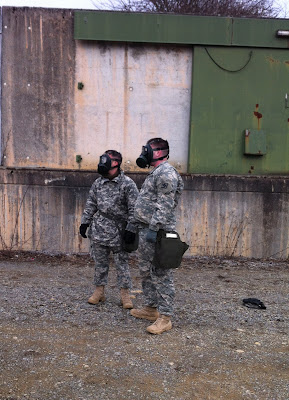 SPC Mac and McLovin with their gas masks on

Wake up is at 0530 and I found that I've slept well due to the fact that I had my earplugs and PT cap over my eyes. I'm sure I was also pretty tired from the lack of sleep previously and running around in full battle rattle yesterday. As we're getting ready I hear McLovin still in his sleeping bag ask a sergeant next to me "Hey sergeant my zipper's stuck. Will you reach down my sleeping bag and just start yanking".

I head up to the washroom, brush my teeth and shave. I then head over to the DFAC for breakfast. While in line the generator dies. Luckily the food is still warm by the time I get there, but I feel sorry for the people that come too much later. When I get inside the DFAC though I don't feel so lucky…they are out of coffee!!! WTH?? How am I supposed to operate without coffee in the morning? :)

We gather after breakfast outside our barracks in full battle rattle with gas mask. We march to our next training area which is a mile or so away. This morning's training is all about our NBC gear and the gas chamber. We do a class on how to do a preventative maintenance check on our gas mask and our other gear as well. We gather around and each try to find some pants and a jacket that will fit us. They have boots as well, but they don't have anything in my size and they are not as important for this exercise so we don't need them. After checking everything with all the gear, we put it all on. First we just put on the mask, which has to be done in 9 seconds. After doing this a couple of times we put on the rest of the gear. This has to be done in 8 minutes, which is pretty easy if you take your time and do it right. We take it off, then put it all back on once again. I'm actually happy to put it on because the weather is pretty cold and with all that gear on it keeps you warm!

The next step is actually going through the gas chamber. For this step we break up into 3 groups and head in, one group at a time. I'm in the second group and as we head in I hear people coughing and choking already. My mask is fine, the seal is good and I can breathe just fine. McLovin is having none of it, and heads straight out the door. We then listen to the instructor tell us about the gas and then he has us move our head around and pretend to chew gum. This is showing everyone that the gas mask keeps it's seal even while you move your head and mouth around. He then has us break the seal for a bit, then reseal it by blowing out to clear the mask and then plugging the vent with our hands while sucking in to create that seal again. A lot of people had various issues and were coughing, I forgot to close my eyes while doing this so they started to tear up a bit.

The final step was taking off our mask completely and saying our name, rank and social security number before leaving. This was easy if you take a deep breath before hand, which I did and then left without too many issues. What's funny is that once I got outside is when I started coughing a bit. We all then walked around letting everything air out including our lungs.

We took off all the gear and then headed to our next class which was not too far away. We first ate lunch inside. Most had brought MREs, I had some of my snacks such as trail mix and beef jerky. After our lunch break we had a communications class. So far the instructors have been very knowledgeable and have done a good job. This class had a good instructor and also one that was not so good. This is one thing I really hate about the army. I found out that the "not so good instructor" was actually a tank mechanic…not even a 25 (signal) series person. It's not his fault that he wasn't a good instructor, it's the army's fault. The army does this all the time with people. They just tell a person "hey we need you to teach a class on ….. whatever". This doesn't do anyone justice. The person teaching the class usually has a short period of time to do a search on Google to try and find some slides to quickly throw together, and then present them to a class. The people in the class do not get the quality training they should because of this. The army needs to do a better job of having the right people train the right subjects. A person with the job that deals with the training should at least be doing the instructing.

Anyways we watched all the slides and then took a couple of radios and practiced sending up various reports such as a 9-Line Medivac request, a SALUTE report, and a SPOT report. Once class was over we headed back to our barracks where we had the rest of the day off. I ate dinner at the DFAC and then headed to the showers. This time there was nobody in there and I took my time. In fact I tried to make the most of it by using two showers and pointing both heads at me so I had two streams hitting me with nice refreshing hot water. I try to enjoy the simple things when I can.

I then relaxed and hung out on my bed until lights out at 2200. 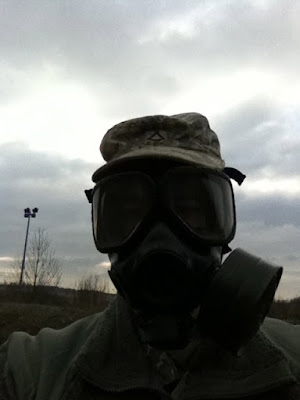 Me showing of my gas mask 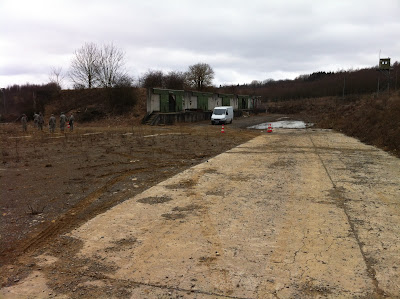 The location for our Gas Chamber training...the actual gas chamber was located in the last bunker