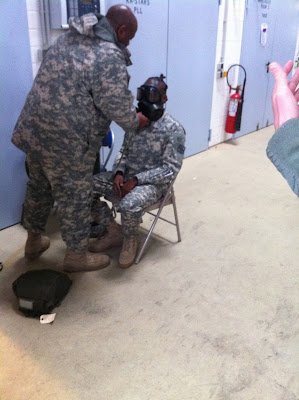 This morning I showed up to the PT formation in my ACUs. I was there just for accountability and then I headed off with two NCOs and some soldiers from 1st platoon to Landstuhl. We all needed our NBC (Nuclear, Biological, Chemical) gear issued to us. We loaded up in the TMP van and I promptly fell asleep a few minutes into the drive which lasts a little over an hour or so.

Once we arrived at the base, we waited in the company conference room for about 15 to 20 minutes before the supply sergeant came and got us. We then headed to a warehouse that has all the NBC gear. Unlike in Korea where they just handed me all the stuff and the process took about 5 minutes, this place was much more involved. Not only did we each try everything on, the mask was put on and tested. It was also hooked up to a machine that tested the mask while on our heads. During the testing we had to move our head around and take deep breaths. This was all to ensure our masks were in good order and the seal was never broken.

The entire process including the drive back to the office took until 1130 which was just in time to go to lunch. I just went to my car and listened to music while eating my sack lunch. I then headed to the office after my lunch.

My boss was back after being on leave for the last week and a half. He finally gave me my initial counseling statement, which is basically describing what is expected of me and what I should expect working there. I was also told that I will initially be assigned one customer. Right now each person has about 4 customers each that they are responsible for. Giving me one will ease me into the whole process of making sure their paperwork is all squared away without getting overwhelmed. It should also help me keep a little busier than I have been because I can actually focus on something.

There was not a lot of anything else the rest of the day. We had a 4-day safety brief which was a little longer than normal and then I left and headed home. After changing and getting ready my wife and our guests (her cousin and her cousin's husband) headed over to SPC Whirlwind's house for dinner. We had some home cooked German food which was great. We stayed there until 2200 just visiting and chatting the whole time. A nice night out with friends and family. 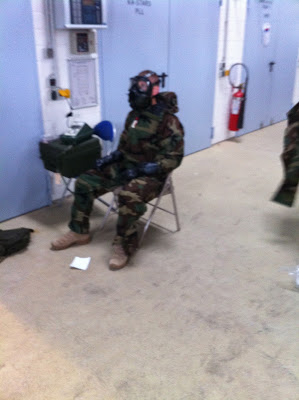